It’s springtime, at least in the Northern Hemisphere, which for many of us means time to accomplish a wide variety of palm-related chores. This is also a good time to think safety! Whether it be lifting heavy pots with your knees instead of your back, wearing gloves and goggles when trimming fronds (especially those well-armed palms), and following the precautions and instructions for the use of power tools, fertilizers, and chemicals, we encourage you to have a safe and productive season!! 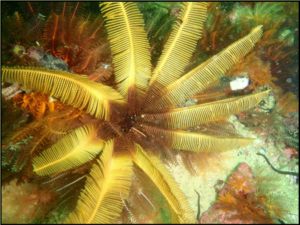 Crinoids: Animals that look like plants
Known as sea lilies, crinoids are marine animals which have evolved plant-like forms. Indeed the name comes from the Greek word krinon, “a Lily” and eidos, “form.” There about 600 species of these animals, some of them closely resembling palms, cycads, and ferns! As old as 200 millions years, they used to be more diverse and abundant. Some consider surviving crinoid species to be living fossils. These crinoids inhabit a wide geographical range.
Note and Video in National Geographic website. Unstalked forms—like the one above—are called feather stars, however not all feather stars can swim. Some just crawl along the bottom. Those that swim, however, are truly captivating.