Greetings, IPS members and palm enthusiasts! This month the newsletter addresses the spiny South American palm Acrocomia aculeata and its various uses ranging from food to biofuel, the de-palming of a Chilean airline logo, the spread of the Red Palm Mite (Raoiella indica) in the Caribbean, and information on an annual meeting of the European Network of Palm Scientists (EUNOPS). 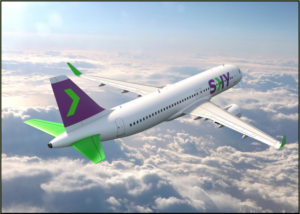 Sky Airlines Takes Palms from Logo
Chilean airline Sky Airlines has renovated its logo and has left out palms. The new design, purple with a green arrow, replaces the green circle and palms on the tail of the aircrafts. Sky Airlines is Chile’s second largest airline. Along with the new logo, the company also has launched a new website and uniforms for employees.