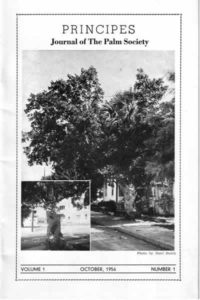 Before we had a Journal …

In January 1956 shortly after the establishment of the Palm Society in 1955, our founder, Dent Smith, prepared the first part of a Bulletin that was circulated to all subscribing and prospective members. The Bulletin was mimeographed on 8½ by 11 in. paper, simply stapled in one corner. The first part ran to 12 pages of text, written and edited entirely by Dent Smith himself, and deals partly with Society matters and partly with palm information. From this modest beginning, the Bulletin went on to be published in February, March, April, May and July – six parts in all, the parts increasing in page length and including short articles by members other than Dent Smith himself. In the final Bulletin No 6, the editor mentions the idea of a proper printed quarterly journal. This new quarterly journal, Principes, was first published in October 1956. Principes Volume 1 ran to five numbers (October 1956, January, April, July and October 1957); thereafter Principes (and later Palms) has been published four times a year.

The Bulletin is a rare commodity; being simply duplicated on rather poor quality paper, many copies probably were discarded long ago. I was given a complete set from the library of Harold E. Moore, who had at least three sets. This is the copy that we have scanned and converted to pdf. We have also included the membership roster as it stood on 25th June 1956. This roster was printed on poor quality paper that has begun to disintegrate and discolor badly, so the reproduction is less than ideal.

The Bulletin provides a fascinating insight into the origins and early growth of our Society.

Six bulletins, as well as a member roster, can be viewed below: