A reconnoitre for the IPS 2016 Sarawak pretour lead to wanderings in the great forests of Borneo.

What a great excuse to go back to Sarawak, the east Malaysian state on the island of Borneo, and check out its National Parks from Mulu in the north east to Kuching in the south west. Philip, Rudy, David and Michael didn’t take much convincing, all are Sarawak veterans having had many off track Sarawak adventures together over the last 20 years or so. Philip, David and Michael flew direct into Mulu while Rudy flew into Kuching, collected the hire car and drove it the 800km to Miri to be ready for our return. 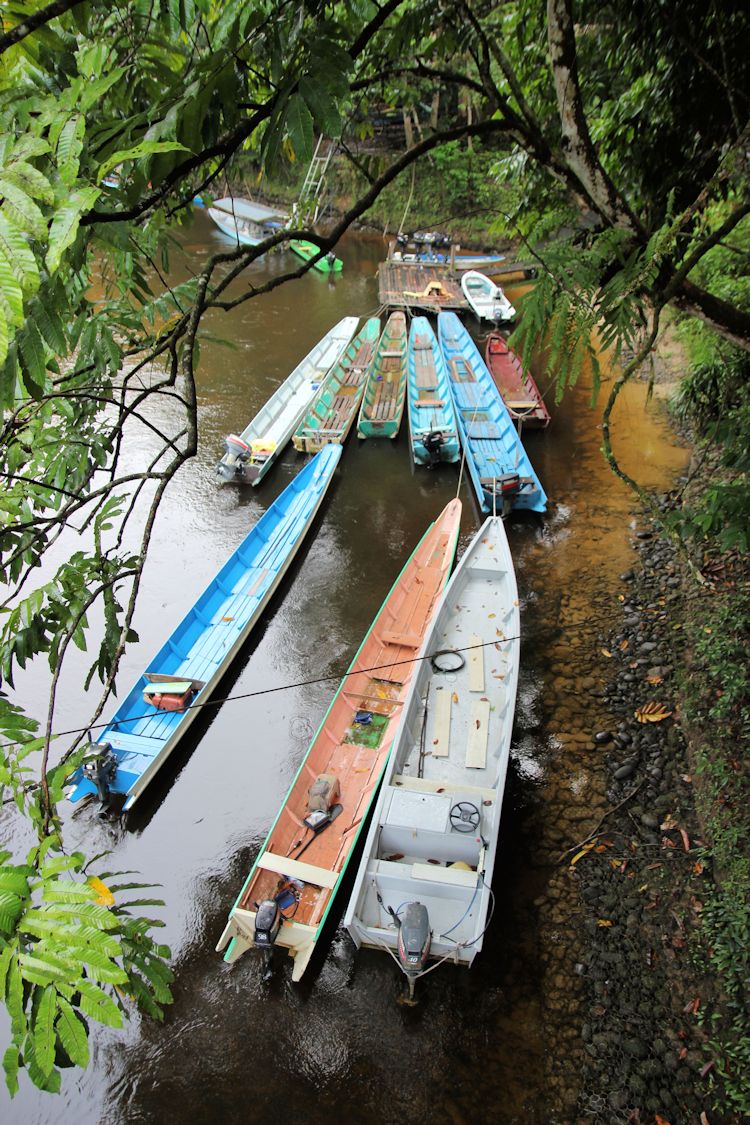 Longboats are the only way to access some national parks 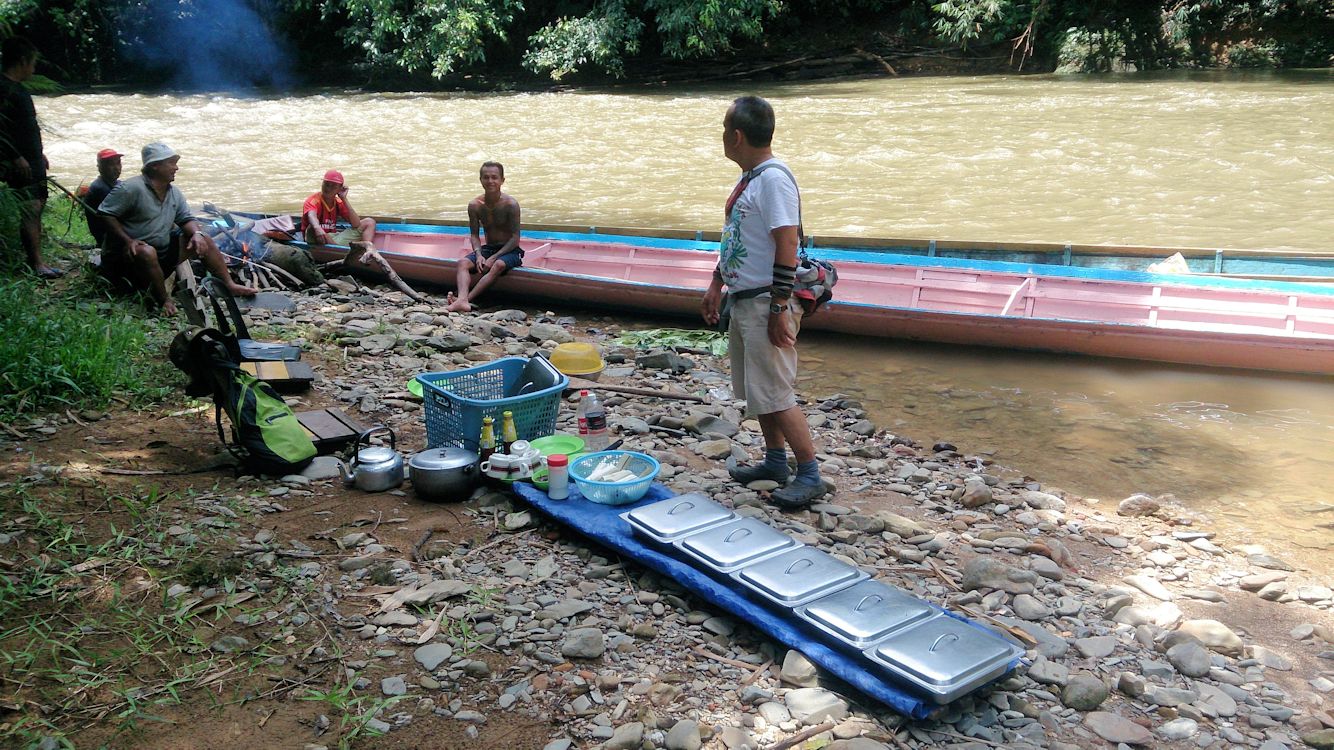 Lunch on the Batang Ai

The intent of the reconnoitre was to visit all habitat venues, see the facilities, walk all of the trails to locate, identify and record the palms, so that options to suit levels of fitness and interest could be suggested to the biennial tour operator and a brief palm guide made available to pre tour participants. The need for the reconnoitre became obvious on the first day. One of the highlights of the longboat trip up into the headwaters of the Sungei Melanau was to see the cliff dwelling Salacca rupicola which hangs down close enough to touch on the limestone cliff faces. We were shocked to see a new boardwalk under construction in the forest at each end of the cliffs, and at a level that would wipe out the most accessible specimens! Further upriver we could not locate our favourite river junction where in the past the sandy banks had been covered in the rheophytic Pinanga rivularis. Later back at the National Park headquarters we found out big floods a few years ago had literally shifted the river bed by some kilometres across the rivers alluvial plain! These two highlights may yet still be included in the tour as park officials have suggested that a new trail will be made to the Pinanga riverbank and that the level of the boardwalk will now be adjusted so that the Salacca can survive. Hopefully disaster averted. 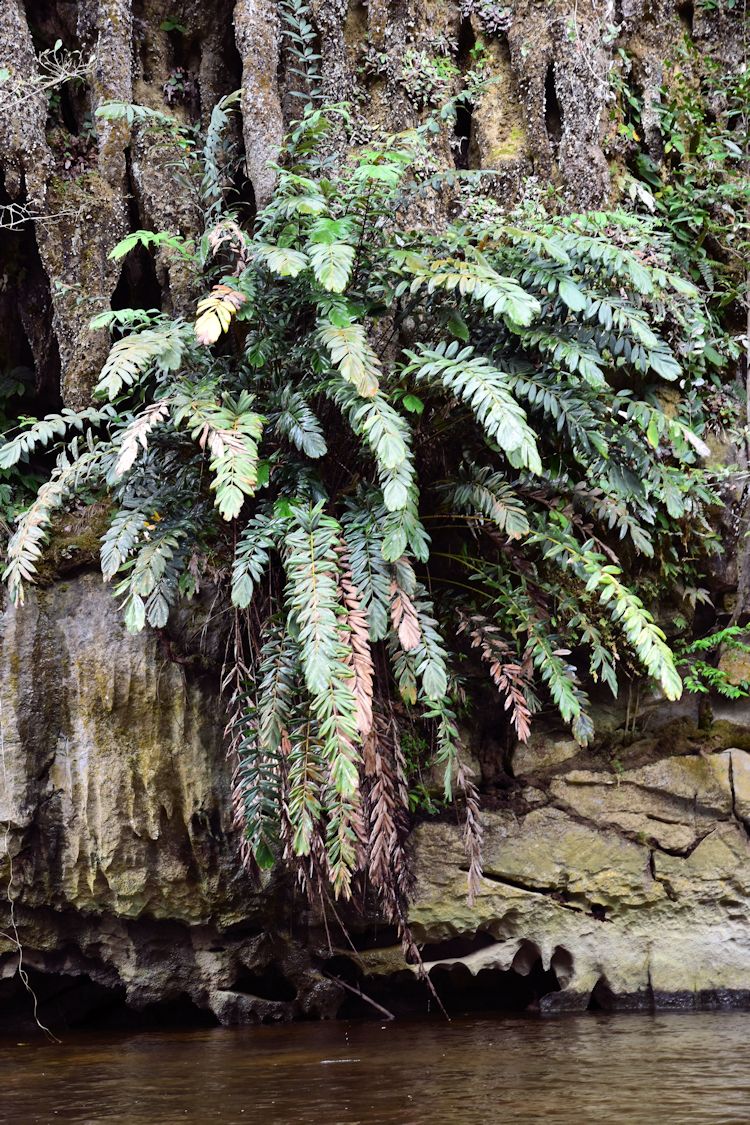 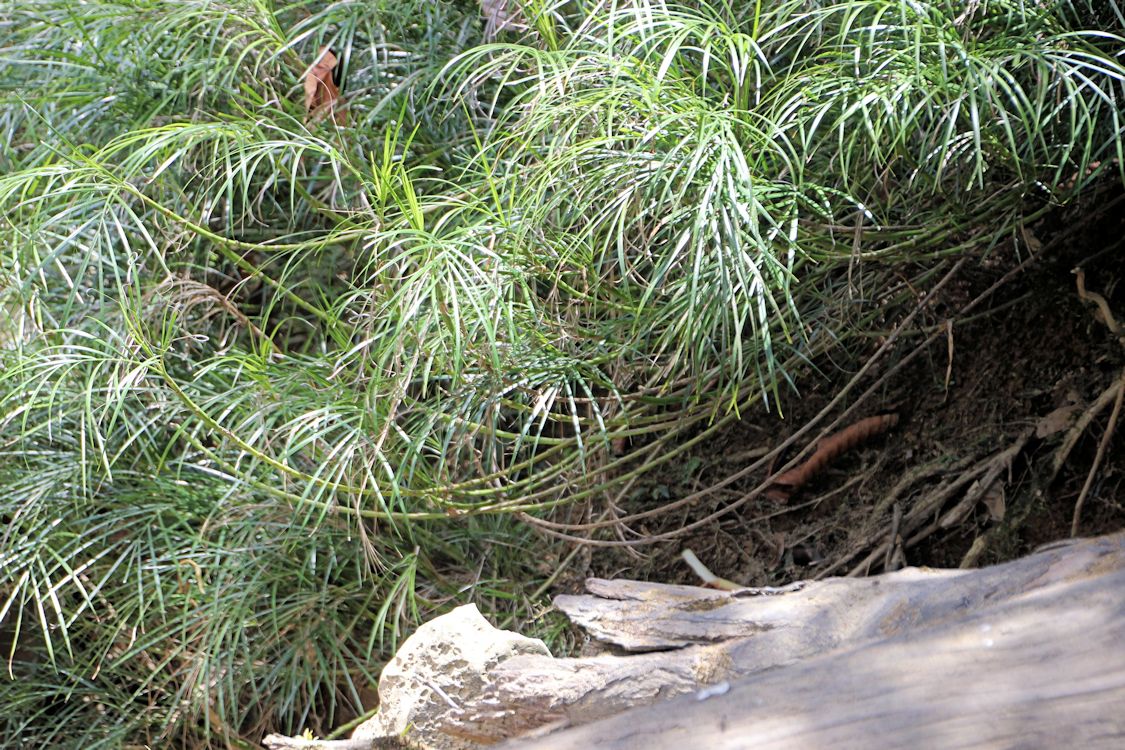 After dragging longboats up cascading rock shelves, visiting a Penan village, exploring boardwalks, caves and the forests for palms, watching spiralling tubes of a million bats exiting the caves at dusk, and a few nights in the park’s longhouse dorms, we returned to the airport, met up with Rudy in Miri and headed to Lambir Hills National Park. Lambir is home to many palm species and some of the standouts are the erect entire leaves of Pinanga mirabilis, the stilt roots of the walking palm Eugeisonia minor, the tall slender trunks and cream centred leaves of Pinanga chaiana, the diminutive Areca dayung and the prolific Licuala. Borassodendron borneensis was once common in this park but mature trunking specimens are now few and far between as the heart of this palm is a delicacy. As usual Lambir was extremely hot and the humidity high. We had been to Lambir more than once but not for many years so it was surprising to find particular palm specimens exactly where we left them and hardly changed in size. Understorey growth rates in tropical forests are not what one would imagine. Having walked the trails, and resolved what would be the short, medium and long trails for 2016 we decided to keep trekking to a colony of Areca dayung visited many years before. We were soon reminded that to get there required crossing seven ridgetops and valleys. The specimens we had originally seen had been since flattened by tree fall but we were pleased to find the colony extended along the muddy banks of a sandy bottomed stream. It must have been adrenaline that got us there, trekking back those ridge tops got higher and higher and steeper and steeper. This one is only for the intrepids! 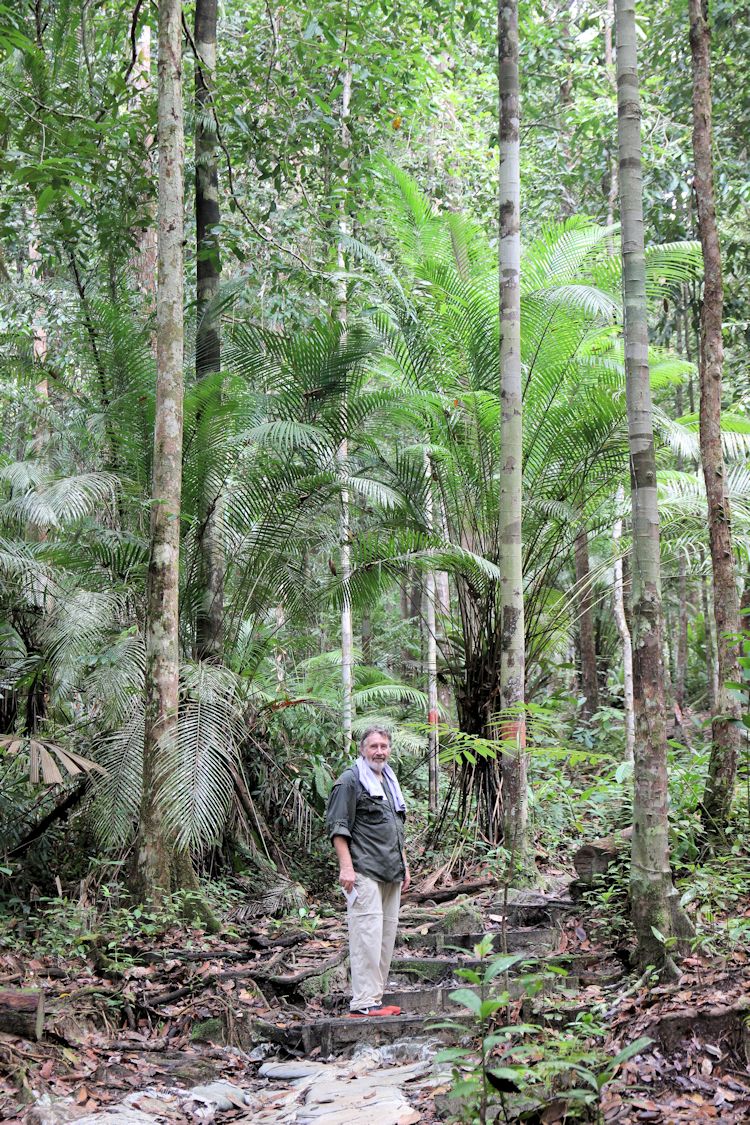 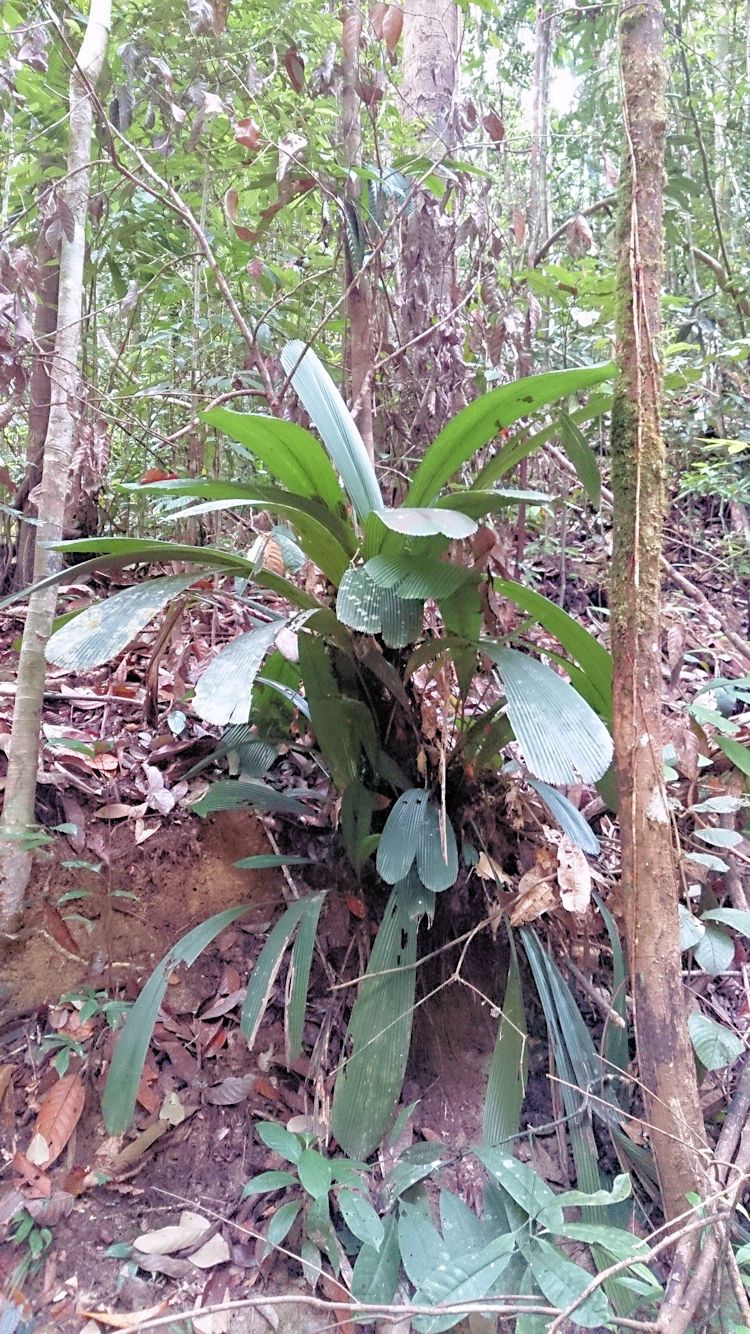 A well-earned rest in a secluded tropical rainforest resort and we were ready to move on to Niah National Park to see palms from the luxury of a boardwalk system and visit the limestone caves where Borneo man was found in the 1950’s and swiflet’s nests are still collected by climbing bamboo poles roped together and anchored into the cavernous ceiling tens of metres above. Then on to Bintulu to overnight in a hotel overlooking the river and wharf with express boats from upriver bringing in locals and goods and larger sea going vessels taking passengers to the many river ports along the coast. An easy drive to Similajau National Park and we were back into the forest, this time mangrove forests and sandy dune forests as well as forested hillslopes inland. The standouts here were the striking red crownshafts of the Cyrtostachys renda along the coast and huge broad segmented leaves of Licuala bintuluensis in the hills behind. We celebrated the success of the trip so far over Tiger beer and seafood in Bintulu’s street of open air eateries. 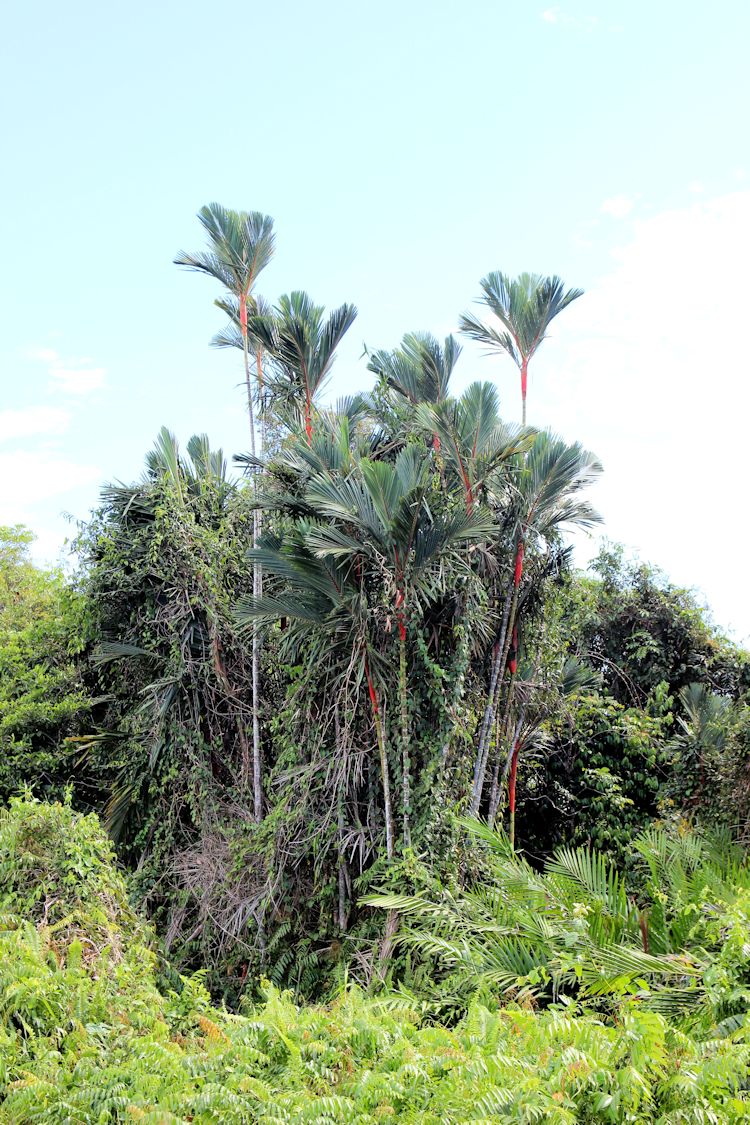 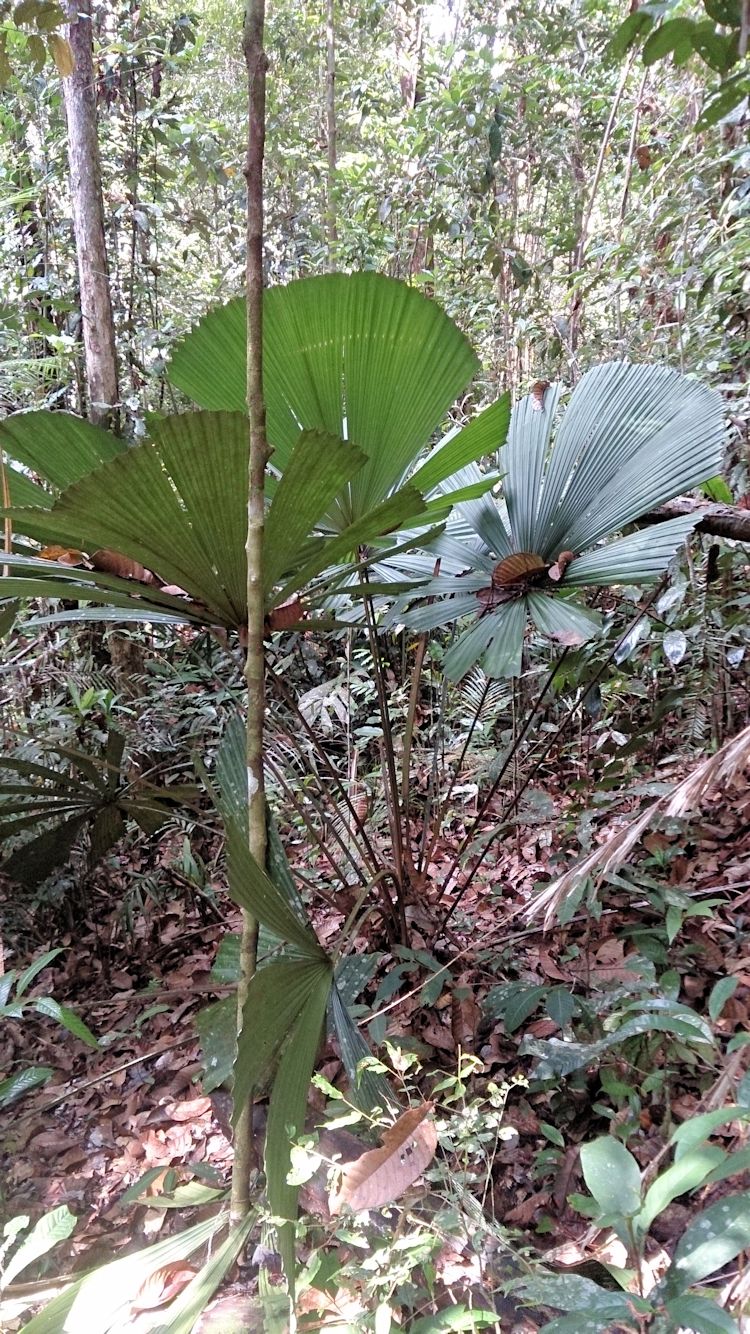 Next day was a rest from trekking as we made our way to Sibu on the mighty Rajang river, the gateway to the interior. There were heaps of photo stops on the way for some of Sarawak’s few larger tree palms, the widely cultivated Metroxylon sagu and Arenga pinnata, tall Pholidocarpus maiadum, dense foliaged bluish clumps of Phoenix paludosa, and lunch at a rest stop with the workers, truck drivers and coach passengers. Our Sibu hotel overlooked the Rajang and the constant traffic of express boats, for most the only form of transport to upriver towns and longhouses. A stroll through the night markets and titbits from the hawker food stalls picked up the atmosphere of this bustling river town. 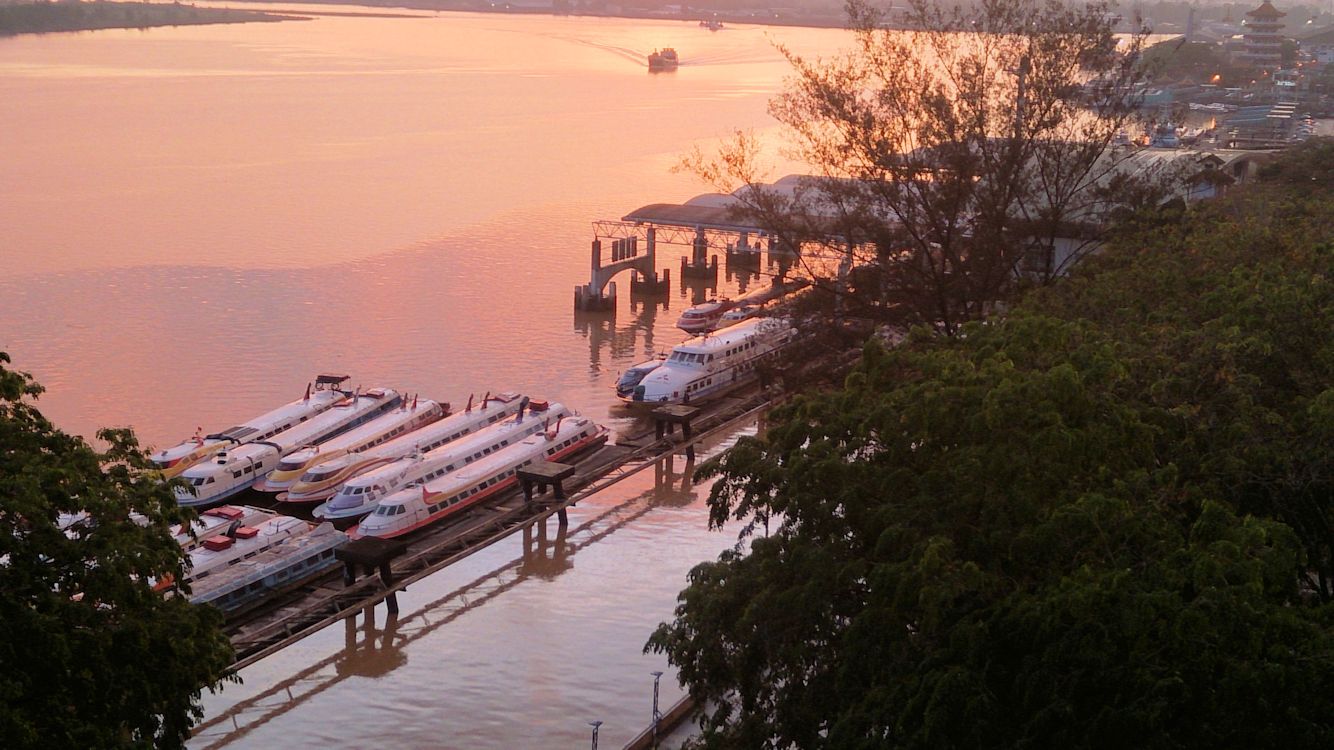 Sunset on the Rajang

Up and away early the next morning to a family park with remnant forest where an acaulescent entire leafed Areca similar to A jugapunya survives on the river banks and a rheophytic Pinanga similar to P tenella var tenuissima clutches the sand on seasonally flooded islands in the river bed. Lunch on the run because we have to get to the Batang Ai dam wall by early afternoon where the biennial tour operator was waiting to take us upriver for a longhouse stay and trekking in the National Park. The boat ride upriver is long and sitting on your haunches with no seat is a test for knees, hips and back, but the scenery is well worth the pain, giant Eugeissonia utilis tower through the forest with their huge vertical flower spikes resembling antennas, tantalising glimpses of understorey palms in the forest shadows, huge Salacca hang out over the river, and if you are lucky monkeys in then treetops. The dam lake has altered river flow and now to enter the rivers proper requires navigation through floating islands of logs and forest debris washed downstream with each upriver storm. Again the reconnoitre was a must as our favourite trail was no longer useable due to multiple tree fall from severe storms and years of neglect. With the knowledge of local guides we found an alternative trail which climbs a knife edge ridge top, past ancient graves in overgrown ceramic urns, and into forest which is home to a number of palm species including the stunningly mottled Licuala maculata, and the large dark trunked Pinanga mooreana. We can’t be sure there will be P mooreana specimens to see in 2016 as the local Orangutan population have discovered the palm heart and are decimating all the populations we saw. Lunch of local produce on a pebble river beach, and revisiting a colony of Salacca dransfieldii on the steep banks of a small side stream topped off the day. 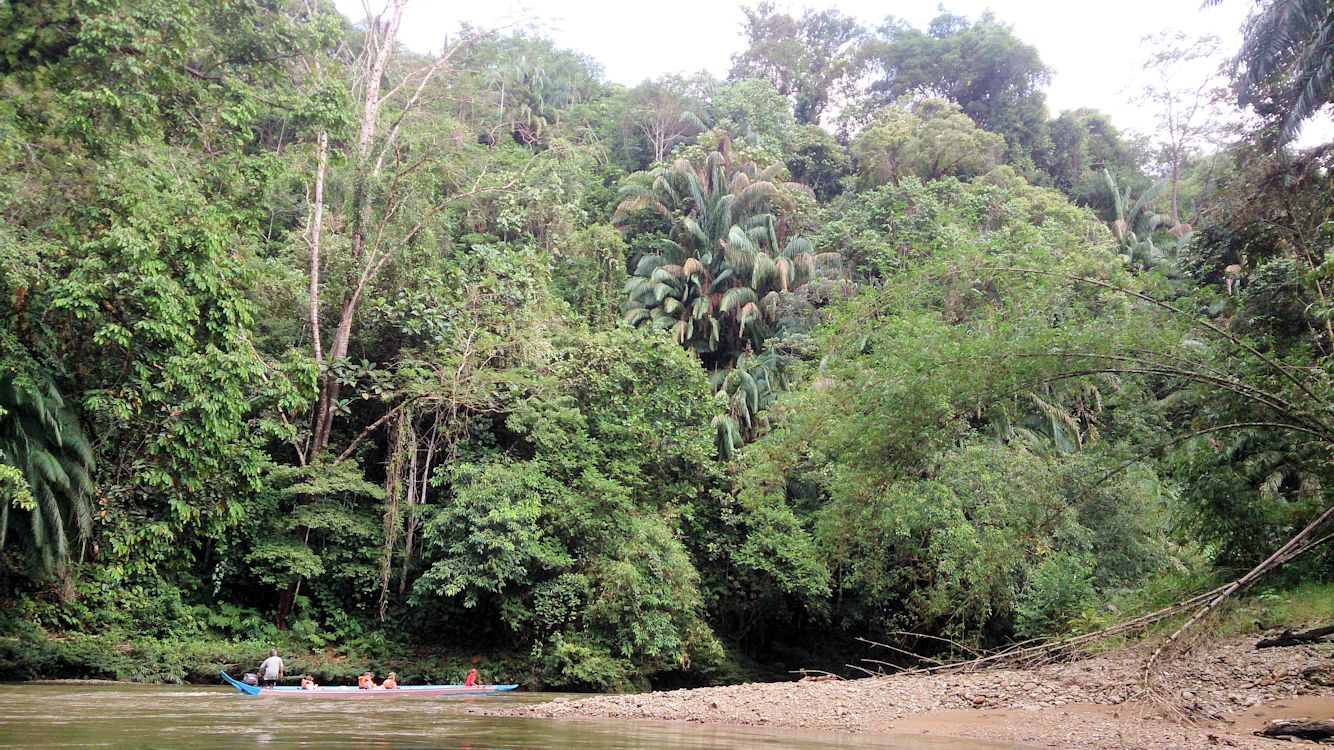 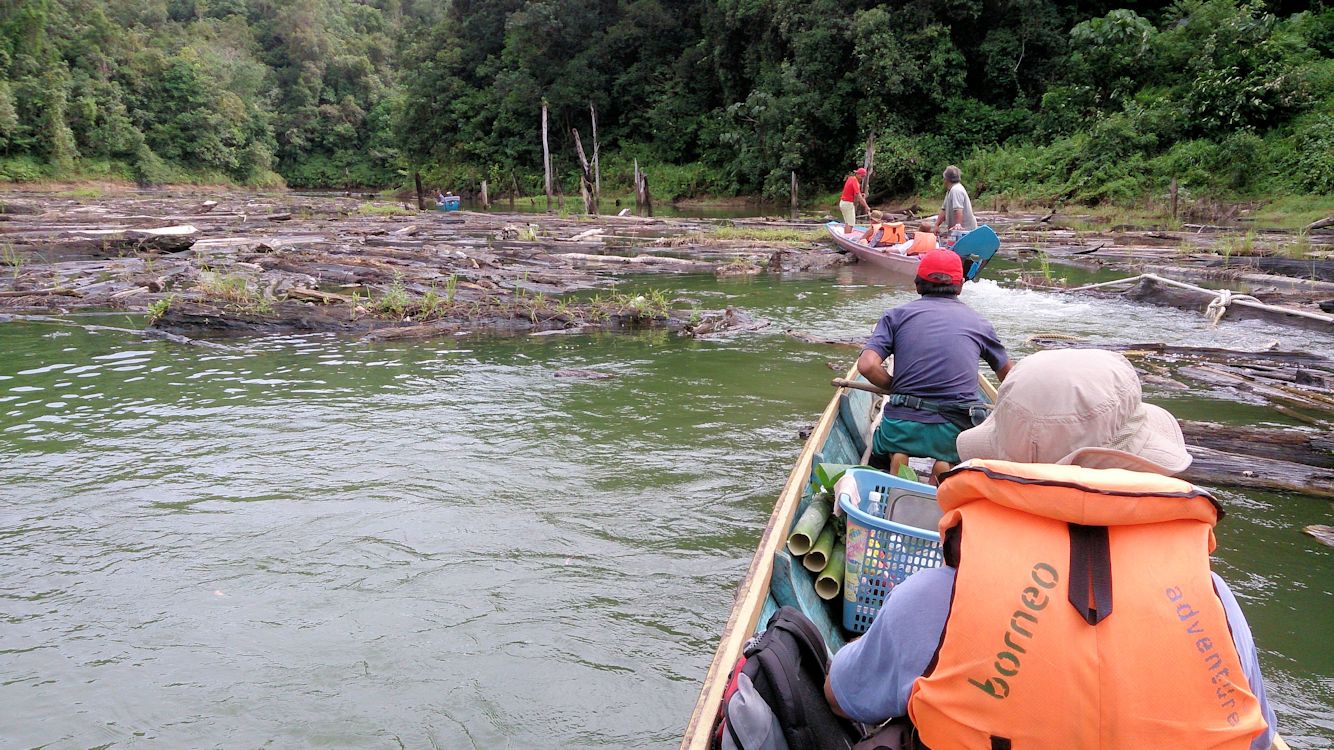 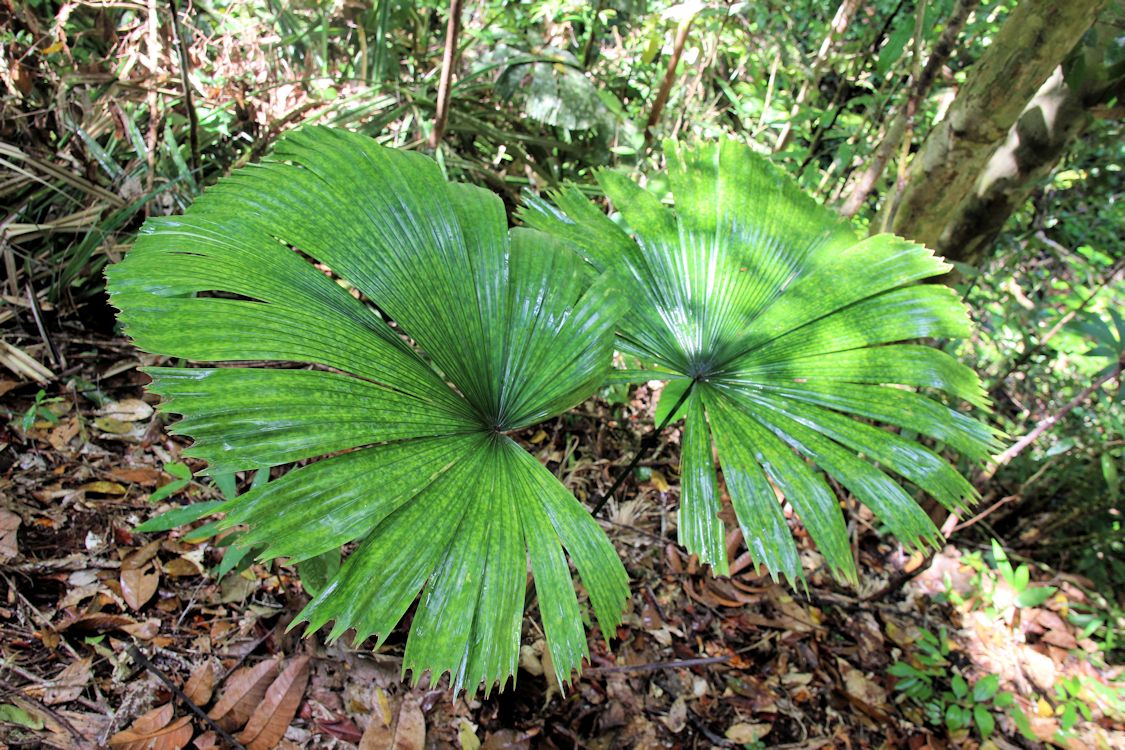 Retracing our steps downriver and across the lake to our car, the drive south west to Borneo Highlands skirted the Klingkang ranges and Gunung Buri, both rich in understory palms but not accessible enough for this trip. The views climbing up the steep zigzag of the old British army engineers road towards Gunung Penrissen were breathtaking as we arrived at the mountain resort built on the old army camp atop the escarpment overlooking Kalimantan. The forest here is very wet, clouded in mist for much of the day and the forest along the escarpment is very rich in many species of understorey palms Pinanga, Areca, Iguanura, Nenga. The dark green foliage of the nearly trunkless Pinanga crassipes contrasts with the brilliant coral red and black fruited infructescences. We enjoyed our dinner in the open walled clubhouse restaurant and the serenity of this location on top of the mountain, the lights of Kuching twinkling in the far distance and the silhouette of Gunung Penrissen disappearing and reappearing in the mist. On our return journey to Kuching we called in to visit a Bidayuh longhouse which has organically grown over many generations. Of course there is always a palm reason for every detour, in this case large specimens of Licuala valida and at a nearby derelict hydroelectric scheme Salacca sp “padawan” on the steep river banks. 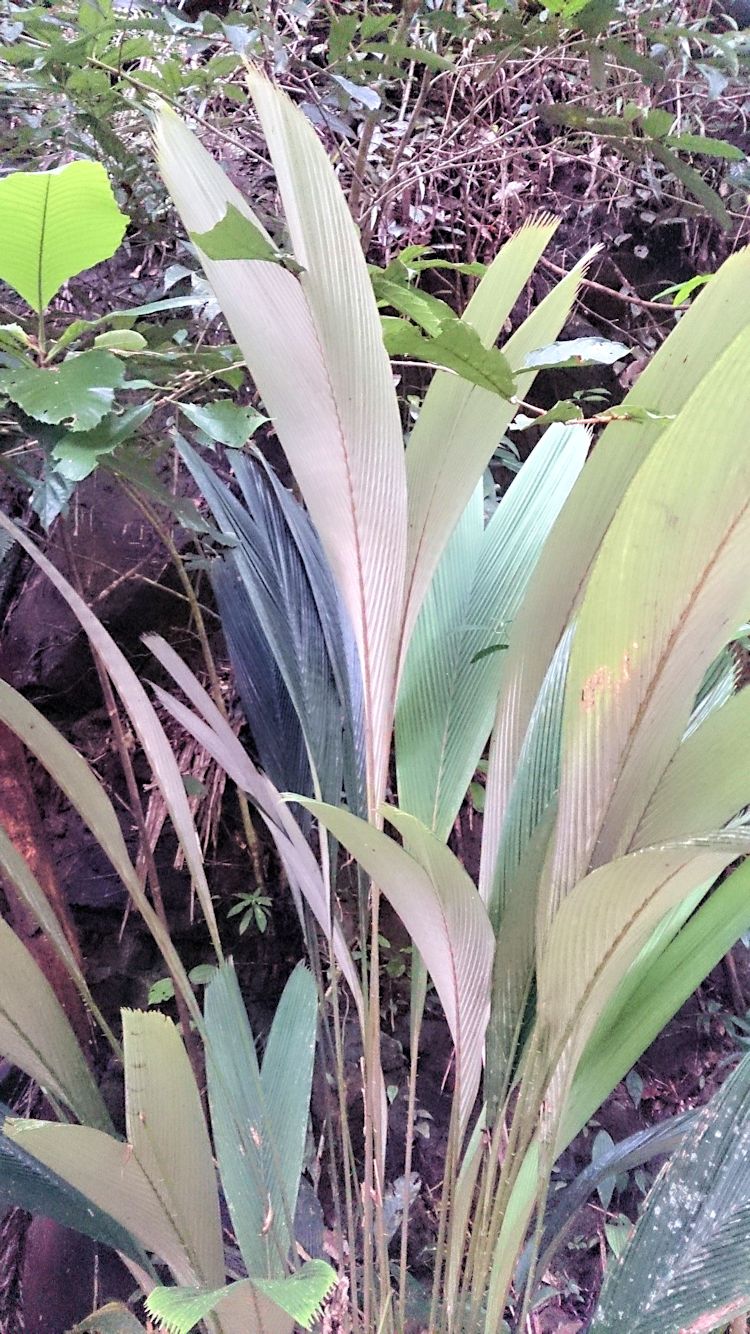 Salacca species at the Padawan hydro

All up we saw over 70 species of Sarawak palms on this trip. Members attending the biennial will see about 40 species and those who attend both the pre tour and biennial are likely to see up into the mid 80’s of Sarawak palm species in habitat and even more in cultivation. Unlike many palm habitats, most Sarawak palms are understory and many are diminutive, so unless you know exactly where to find them you can be within a few metres and will miss them. Some are too off the beaten track to include for 2016 but with the help of some of us as volunteer palm guides to share our knowledge and Sarawak experience, attendees will see most of these species. The 2016 pre tour will be operated by a local Kuching inbound tour company. The tour will be 13 days, and local guides will accompany the group at every habitat venue. The tour will soon be available for booking through the IPS website along with biennial registration. It will be available only to IPS members, and preference will initially be given to members attending the biennial. Numbers are limited.