The Beverly Hilton, home to the annual Golden Globe awards, opened in 1955. Architect Welton Becket designed the building, along with other notable gems including Capital Records and the Santa Monica Civic Center. A tiki-themed Polynesian restaurant, Trader Vic’s (home of the original mai tai) occupied the ground floor, and a decision was made to “topicalize” the property by adding rare palm trees. 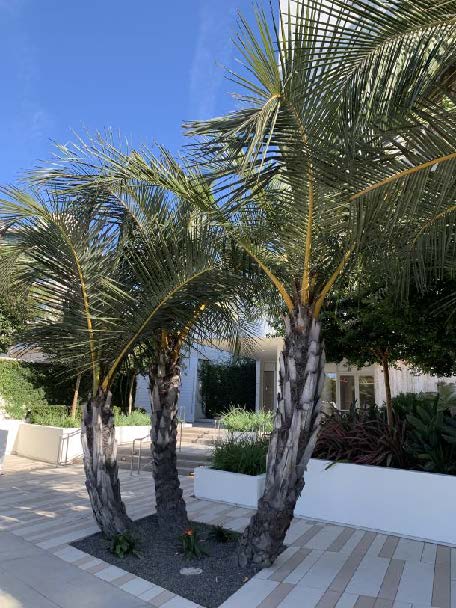 The pioneering Los Angeles nurseryman David Barry was tasked with selecting the plants. He had received about 1000 Jubaeopsis caffra seeds (by boat, no airmail then) a few years earlier; however, he was only able to germinate three! These were planted at the Beverly Hilton.

These legendary palms, now over 70 years old, are believed to be the oldest examples outside of South Africa. Two clumps remain, one with three stems the other with two. The leaves are over 25 feet long. The trees have produced fruit for several decades. They appear remarkably healthy despite continuous ongo-ing construction.