This month: Botanical Garden Congress in Poland and 200th anniversary of the host garden! Also a short note about palm oil. The IPS Biennial in Colombia is happening later this month; send us your stories, photos and comments on it. We might publish them (if you want), but also we would like to have feedback about the event and its organization. Share with us!

BGCI’s 10th International Congress on Education in Botanic Gardens
Bringing nature to the city. Celebrating the 200th anniversary of the
University of Warsaw Botanic Garden. 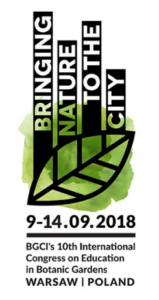 This year in Warsaw, Poland, the 10th International Congress on Education in Botanic Gardens
will be held, from 9th through 14th September. It will be an interesting opportunity to link up with people from all around the world who are passionate about plants. The hosts are Botanic Gardens Conservation International
(BGCI) and the Botanic Garden of Warsaw University, which was founded in 1818 and will thus celebrate its 200th anniversary! It has gone through different situations, including being depleted during World War II and enthusiastically recovering afterwards. This garden focuses on biodiversity conservation, but also on education and public engagement.