This month: Sad news, the passing of a beloved IPS member. Also, some Palm Facts, Palm Art, and information for the 2022 IPS Biennial meeting. 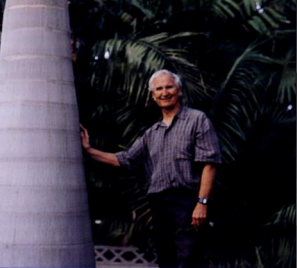 Ralph Velez next to one of his Roystonea oleracea. Photo © Warren Schultz published in the book “A Man’s Garden” (2001).

We are deeply saddened to inform you that Ralph Velez, one of our longestserving members, passed away on April 24th, 2018, in a hospice in Orange County, California, after a long illness. Ralph Velez was born in New York City and lived in Southern California most of his life; his garden attracted the attention of many plant enthusiasts because he had more than 300 species of palms! He devoted his life to growing palms in a temperate climate.
He will always be remembered for his lifelong enthusiasm for palm growing and as one of the Palm Society of Southern California’s founding members.

Interview of Ralph by Don Tollefson back in 1994 published in Principes (now Palms): Principes 38(2): 8I-87.
You may also read more about his astonishing garden in the book “A Man’s Garden” by Warren Schultz (2001).