This month: Palm colonization, a bit of palm singing in church and still inviting you to join us in Colombia in June! 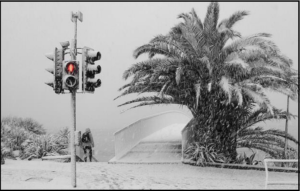 Even hardy species can’t tolerate prolonged sub-zero temperatures. Here “Date Palm [Phoenix canariensis] during blizzard in Torquay (UK): on 18th March 2018 a blizzard moved in around 10am, and although the intensity lessened about 2 hours later, it continued to snow moderately for about 20 hours.” Photo by Torquay Palms (CC BY-SA 2.0).

Palms are able to adapt to a wide range of climatic and environmental conditions, from arid and semiarid zones, to rainforest, even flourishing in rivers and streams, from lowlands at sea level to high mountains. However, they have not generally been able to overcome one last barrier: sub-zero temperatures. Even considering that there are some well known hardy palms, such as Trachycarpus fortunei (Windmill palm), Chamaerops humilis (Mediterranean
Fan Palm), or Washingtonia filifera (California Fan Palm) to name a few, experience shows that even the hardiest palms require that the average temperature of the coldest month be above 2° Celsius (or 36° Fahrenheit).