Hey, fellows! Happy new year! We are now under new administration! Daniel and Kevin are the two new editors taking the helm of this International Palm Society Newsletter ship. Daniel Meza is a 26-year-old Venezuelan, agronomist, palm lover, and tireless traveler living currently in Chile while getting his master’s. Kevin Hrycay is an American in central Florida and a palm enthusiast and new IPS member.
Since we are totally new in all of this, we’ll deeply appreciate any support all of you might give us, whether it be topics, photos, suggestions, comments, or feedback. We thank Kim Cyr and Scott Zona for letting us take over this important task. 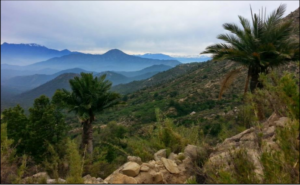 A photograph of Jubaea chilensis in the foreground set before the backdrop of the Andes Mountains. The photograph was taken at La Campana National Park, Chile. Photo by Daniel Meza.

CHILEAN WINE PALM
The Chilean Wine Palm (Jubaea chilensis) is a monotypic palm endemic to Chile and is among the nation’s points of pride. Unfortunately, the population of this prominent palm has been depleted by about 98% in the past 500 years. Sap from the palm is used to create a syrup known locally as miel de palma. Additionally, urban expansion and use of Chilean Wine Palm leaves for Easter traditions have taken a toll on its population. Even though this species is protected by law, people usually don’t recognize its importance or take appropriate measures to prevent the palm’s exploitation. That said, there are some projects designed to help the Chilean Wine Palm’s recovery. For instance Fundación Palma Chilena (The Chilean Palm Foundation) has been working for 20 years to increase understanding about this palm; the foundation has nurseries as well. Furthermore, Fundación Jardín Botánico Nacional (National Botanic Garden Foundation) has an interesting census of individuals and populations reported in Chile as they have a collection of 50 trees planted back in the 60’s. For more information about the Fundación Jardín Botánico Nacional’s Inventory of Chilean Palm existing plants and populations.