Participants in the June 2016 Biennial may have the rare good fortune to catch sight of the endangered Proboscis Monkey during the visit to Bako National Park. “Bako is home to approximately 275 rare proboscis monkeys, found only in Borneo. The male is an odd­looking creature, with a huge pendulous nose and a large pot­belly, weighing in excess of 20 kg.,” according to the Sarawak Forestry website. 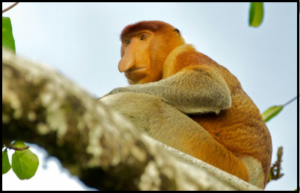 These photos were taken by Jack Sayers during exploratory visits to Bako. Should we mention 2016 is the Year of the Monkey?

“As with any wildlife, seeing the proboscis will require a bit of luck,” said Jack. “That being said, when Lindsey and I were in Bako for three days we saw them at least once every day. Since then, I’ve heard that they have become even more visible because the rival macaques have been removed.”