Most palms existing in older gardens can face a future of uncertainty. Many properties must be cleared for construction or infrastructure purposes, leaving palms bulldozed over or sent to the chipper. Colin Wilson, Margaret Kraa, and I have rescued some magnificent and rare specimens from this fate. 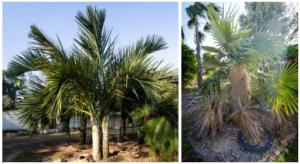 Discovered at site: a magnificent Dypsis decipiens followed by a Coccothrinax crinita

After a tip off from a local fellow nursery operator I went to investigate a block of land not far from my house; the land had been sold and everything on the land including the existing house and gardens had its days numbered. At some stage in the very near future the bulldozers and giant mulching machines would be moving in and the land would be cleared for many smaller residential dwellings.

Margaret told me that there were quite a few large rare palms on the block and mentioned that the previous owner was happy to have them removed if anyone was interested in them. My curiosity got the better of me and I stopped in for a look around. As soon as I entered the property I was faced with three large, robust and beautiful Dypsis decipiens. All had two twin stems. “WOW!” I thought to myself. I walked around some more and found many old established rare palms, including two Ravenea xerophila and a large Coccothrinax crinita.