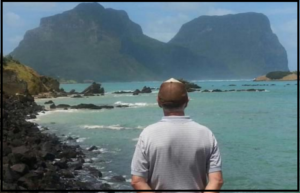 “Lord Howe Island: The paradise of the Tasman” was the title that I saw in the dusty old National Geographic from 1935 that I read as a 6­year­old boy in 1977. After many years of dreaming and procrastination and growing all the Lord Howe Island palms in my yard, the dream became a reality. Many months ago I had organized the three­night stay on Lord Howe with my cool­climate palm mentor Darold Petty from San Francisco. Lord Howe Island has 320 residents and only allows 400 tourists on the Island at a time. The Island was designated a World
Heritage Site by UNESCO in 1982. Howea forsteriana is by far the most
dominant palm species on the Island and grows from the beaches in dense
stands that are sometimes nearly void of any other vegetation due to fallen frond mulch, growing in very sandy calcarenite soils, a form of limestone (or dolomite). Howea growing in this soil were perfectly green and lacked the characteristic potassium deficiency evident in some Mediterranean climates. Some older Howea were approximately 20 m tall.

The Mount Gower Climb is rated as the most difficult but most enjoyable of all the hikes on Lord Howe Island, and most of the island’s rare and endemic palms and plants can be viewed on the way up. At 875 m (2900 ft), it is the Mt. Everest of Lord Howe Island.

“The Man,” Jack Shick, operator of Sea to Summit Expeditions, is a fifth­ generation Islander and, like his father and grandfather, has expertly guided many visitors up the unforgiving slopes of Mt. Gower. To the uninitiated Jack would just seem like another everyday Aussie bloke, but put him on a mountain and he’s like a combination of a Special Forces soldier’s agility and fitness combined with the flora and fauna knowledge of Sir David Attenborough.

After arriving, we proceeded in single file through a Kentia forest that was adjacent to the coastline. It wasn’t long before we were climbing up a steep slope that comprised of Pandanus forsteri, Metrosideros and of course Howea forsteriana and belmoreana. Strategically placed ropes made the climbing easier. Then it was on to the lower road, which is a tiny track worn into a steep cliff face with rope all the way along. Our guide Jack was very liberal in explaining the island’s local flora and fauna. We then had a short break where Jack demonstrated how easy it was to
climb the trunk of Howea forsteriana using a hessian strap to collect ripe seeds.