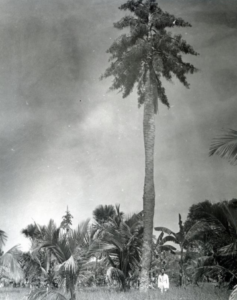 If you were so fortunate as to attend the 2014 Biennial in South Florida, you received this little gizmo at the Fairchild Tropical Botanic Garden dinner. Dr. Carl Lewis, Director of FTBG, spoke that evening about one of the greatest plant explorers of all time, Dr. David Fairchild, namesake of the Tropical Botanic Garden. As described on the FTBG website, “For 37 years, he traveled the world in search of plants of potential use to the American people. His far-reaching travels brought into cultivation in the U.S. many important plants, including mangos, alfalfa, nectarines, dates, horseradish, bamboo, and flowering cherries.”

If you haven’t yet plugged this special flash drive into your computer, it is highly recommended you do so, but only when you’ll have enough time to get lost in the history of Dr. Fairchild’s 1940 official collecting expedition for FTBG, sailing from the Philippines to the Indonesian archipelago on a special oceangoing Chinese junk