Fifty Years Back: International
Palm Society’s 1964 Biennial in Arcadia,California
Excerpts from the archives of PRINCIPES 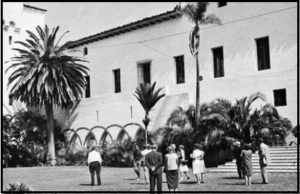 “The California members of The Palm Society were hosts to the fourth Biennial Meeting, which was held at the Los Angeles State and County Arboretum, Arcadia, Calif., on April 11th, 1964 at 10 a.m. About sixty members and their guests were present. “That evening the banquet was held at the Sportsmen’s Lodge Tavern in Duarte. It was a merry group, with much animated conversation. Dr. John Popenoe was the speaker, giving an account of the work with palms going on at Fairchild Tropical Garden – both the scientific work and the introduction of new species. He told us that this summer 256 new species will be planted on the grounds of the Garden, most of them never before
grown in the United States. He showed color slides of the Garden and part of its palm collection.

“Monday was Santa Barbara day. Boarding our chartered bus at the Arboretum soon after eight, we sped along through walnut and lemon groves and fields ready for planting, arriving at Goleta at half past ten, where we were met by our new VicePresident, Mr. Otto Martens, with a caterer’s truck offering refreshments. A walk through the Diegaard wholesale nursery opened our eyes to the fact that ornamental palms are being grown and sold by the
hundred thousand, at prices, which to the Floridians, seemed fantastic.