Origins of the International Palm Society
from Dr. John Dransfield 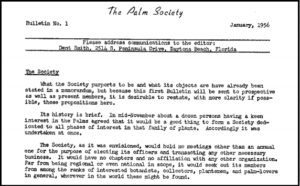 For the complete Bulletin, log in at www.palms.org and use the Members menu

In January 1956 shortly after the establishment of the Palm Society in 1955, our founder, Dent Smith, prepared the first part of a Bulletin that was circulated to all subscribing and prospective members.

The Bulletin was mimeographed on 8½ by 11 in. paper, simply stapled in one corner. The first part ran to 12 pages of text, written and edited entirely by Dent Smith himself, and deals partly with Society matters and partly with palm information. From this modest beginning, the Bulletin went on to be published in February, March, April, May and July – six parts in all, the parts increasing in page length and including short articles by members other than Dent Smith himself. In the final Bulletin No 6, the editor mentions the idea of a proper printed quarterly journal.