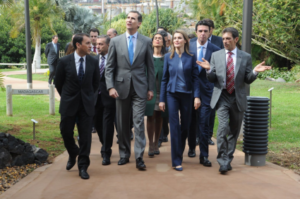 When the International Palm Society Board of Directors held its October 2011 meeting in the Canary Islands, a highlight was a visit to the Palmetum of Santa Cruz, Tenerife which was under development.
As described by IPS Director Carlo Morici who was deeply involved in its conception and realization, “A landfill is being converted into a botanical garden in an almost magical way.”
January 28, 2014 the garden was formally inaugurated. After many years of labor sometimes interrupted by disaster and neglect, this moment represents an enormous accomplishment.