In Hawaii where almost all of the world’s climate types can be found (only truly arctic is missing), plants have been brought from everywhere and grow in abundance. It’s hard to resist so many pretty faces and as a consequence most Hawaiian gardens look like exuberant Russian salads. We wanted to bring some focus and restraint to our surroundings and decided that, because after tropical natural history we loved food almost as much, we would grow only palms and bamboos and only those that produce groceries.

We’re well provided for. We have 23 acres (about ten hectares) of land on the windward side of Hawaii island (the Big Island). The property ranges in altitude from sea level to about 150 feet (about 50 meters), is bounded by the ocean in front and a stream with falls and pools bordered by a shady rain forest on one long side, meadow on the other sides (visualize savannah). There are two perennial springs, and the trade winds bring us about one-quarter to one-half an inch (3 to 6 millimeters) of rain almost every night. (Sometimes much, much more.) Our top soil is volcanic, deep and rich. It’s like gardening in devils food cake.

Ask most folks here—even palm growers—to name the palms that produce an edible product and you’d hear “coconut” followed after a bit by “dates, right?” and then pretty much nothing. Someone will tentatively say “what about that acai stuff?” or “well, heart of palm salad—is that from coconut?” then silence. If you were to ask palm growers in Southeast Asia this question, you’d also hear “the Palmyra palm” and “isn’t sago from a palm?” Yes, sago is the starchy pith from the trunks of mostly Metroxylon palms. And Borassus flabellifer—the Palmyra palm—is known as the palm-of-a-thousand-uses. All parts of it, even the roots, are consumed. So, out of more than 250 genera and 2500 species of palms, we’ve mentioned four. In fact, over 200 give something at least digestible and often yummy. 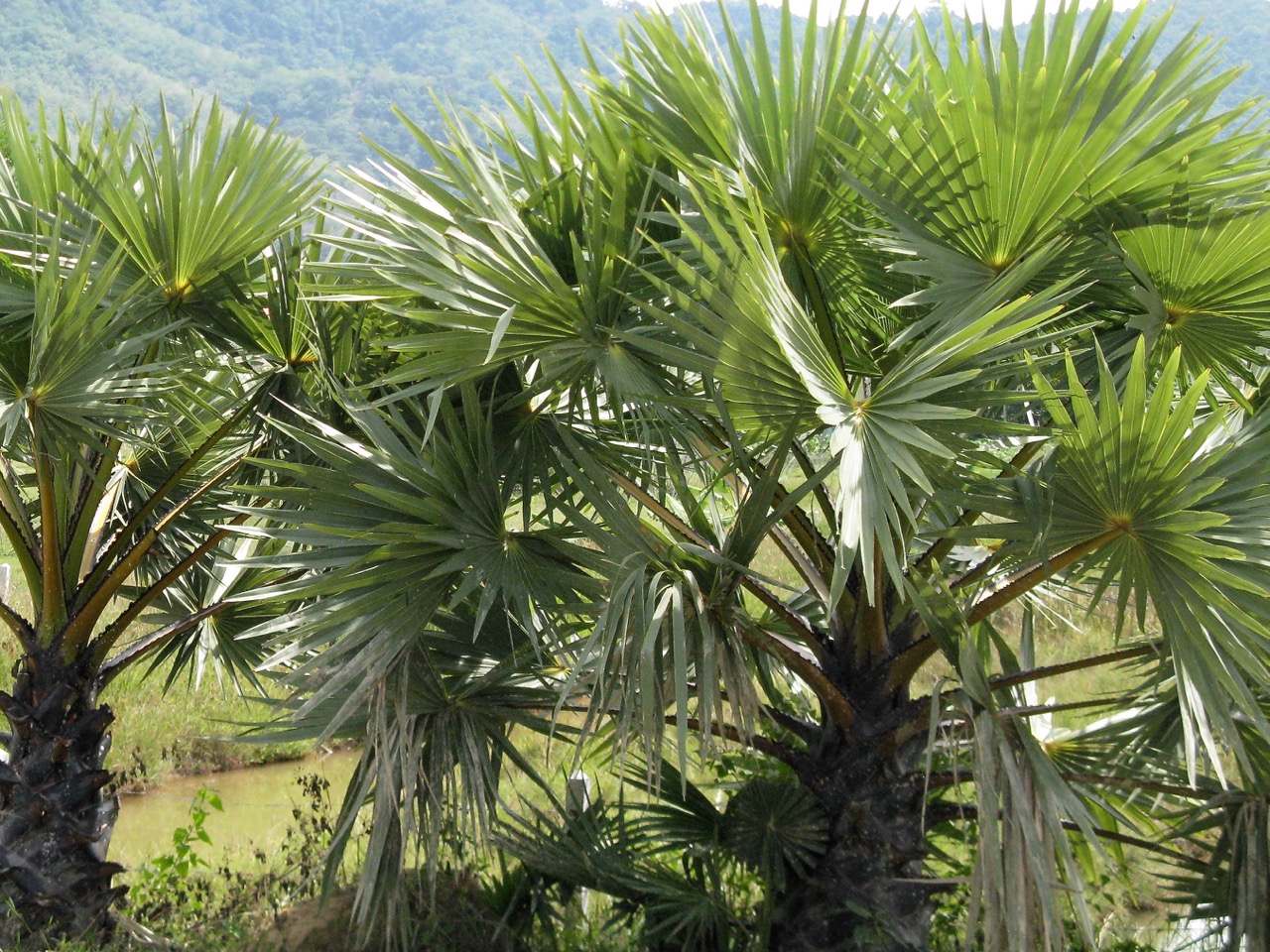 But many of these generous palms live in very restricted conditions—often remote—and often used only the by the local inhabitants. Palms are better known for their uses in house and furniture construction and landscaping than for their edibility. But they’re out there, and because they are locally useful are often left growing—if not exactly cultivated—when all the surrounding forests are extirpated. And we want to grow them—and use them—too.   Out of this surprisingly large group, we have about 30 in the ground at varying degrees of maturity.

But there’s a catch. The plants are–for the most part—unavailable. Even the seeds are uncommon. (When we’ve given our wish-list to palm growers around the world, they usually roll their eyes and say “I’ve never heard of half of these.” But we live in hope.) Too bad. Besides the pleasure of eating them there is always the special pleasure of looking at them. We couldn’t have decided on a lovelier crop. Lovely but rare. And getting rarer. And slow. And formidable.

There’s another catch: plants can’t run away. When they have something that something else wants they have to defend it where they grow. The first lines of defense are toxins or spines or both. The palms with the most useful parts are often ferociously well protected. (Not all of them; the coconut is by far the most useful of all palms and is positively benign. Benign, that is, until you’re clobbered by a falling fruit. In Belize it’s said that if you’re hit on the head by a falling coconut it’s because the gods are angry with you. No, it’s because you were so stupid that you strung your hammock between two coconut trunks and lay down in it.) But most palms make you work. With welder’s gloves on.

Caryota urens (“urens” from the Latin for “stinging”) produces the best sugar from boiled-down sap and the best toddy from fermented sap of all the many palms that are used to make sweeteners and/or knock-you-flat cocktails. (Great sago too, by the way.) It also has tissues that if touched produce a rash worse than nettles.

Arenga pinnata, the gomuti palm, is even called the sugar palm for the exceedingly sweet sap produced by its infloresences. It not only has dermo-toxic tissues but also thorns a foot long. (We’ve used them as cake testers and satay skewers.)

Aiphanes horrida is the fanciest plant you can imagine—upright—ruffly and producing long branched stalks of delicious red fruit. Gorgeous. But every millimeter of the plant, including the undersides of the leaves, bristles with spines that make a cactus look innocent and also break off like sea urchin spines to fester under your skin if you’re not prudent. 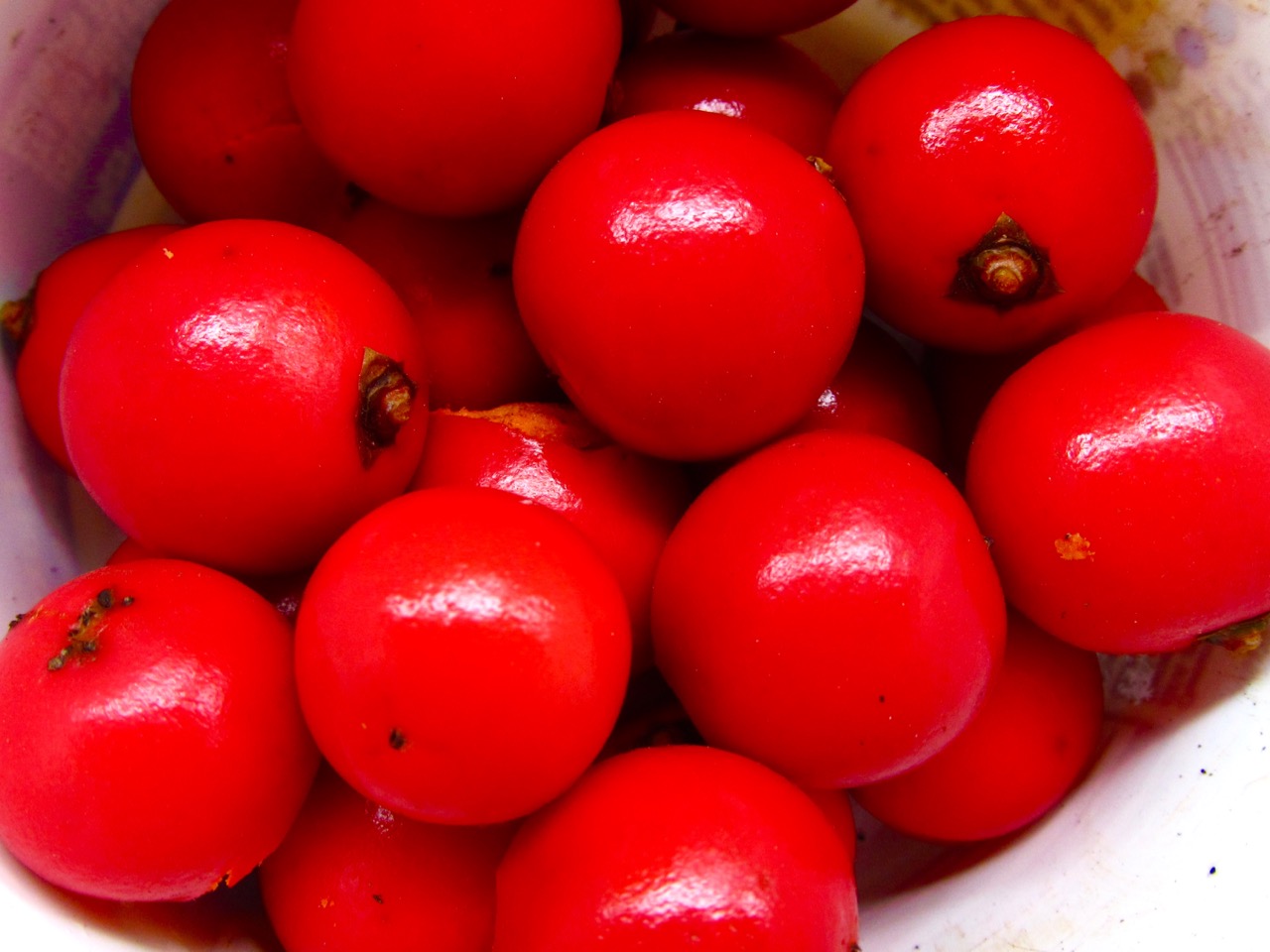 Salacca zalacca makes no trunk—just a dense fountain of leaves in an immense ultra-thorny bowl. In the middle of which it offers you extraordinary-looking, glossy, scaly, chicken egg-sized fruit known as Salak. They taste like crispy pineapple.  Good luck.

Even the date palm—Phoenix dactylifera—cultivated for millennia—and its relatives (several of which also have edible fruit) have converted the basal leaflets on their leaves into rigid, sharp daggers.

But we are undaunted. We want to grow them all—the Euterpes and the Oncospermas and the more than 50 other species with delicious “cabbage.” (That’s the palm heart used in salads. Here in Hawaii the Bactris gasipaes is grown not for its eminently edible, unctuous peach-sized and peach-colored fruits but as a farm crop for its huge, delicious crown shaft. Many other species in the genus Bactris have wonderful fruit as well as cabbage. 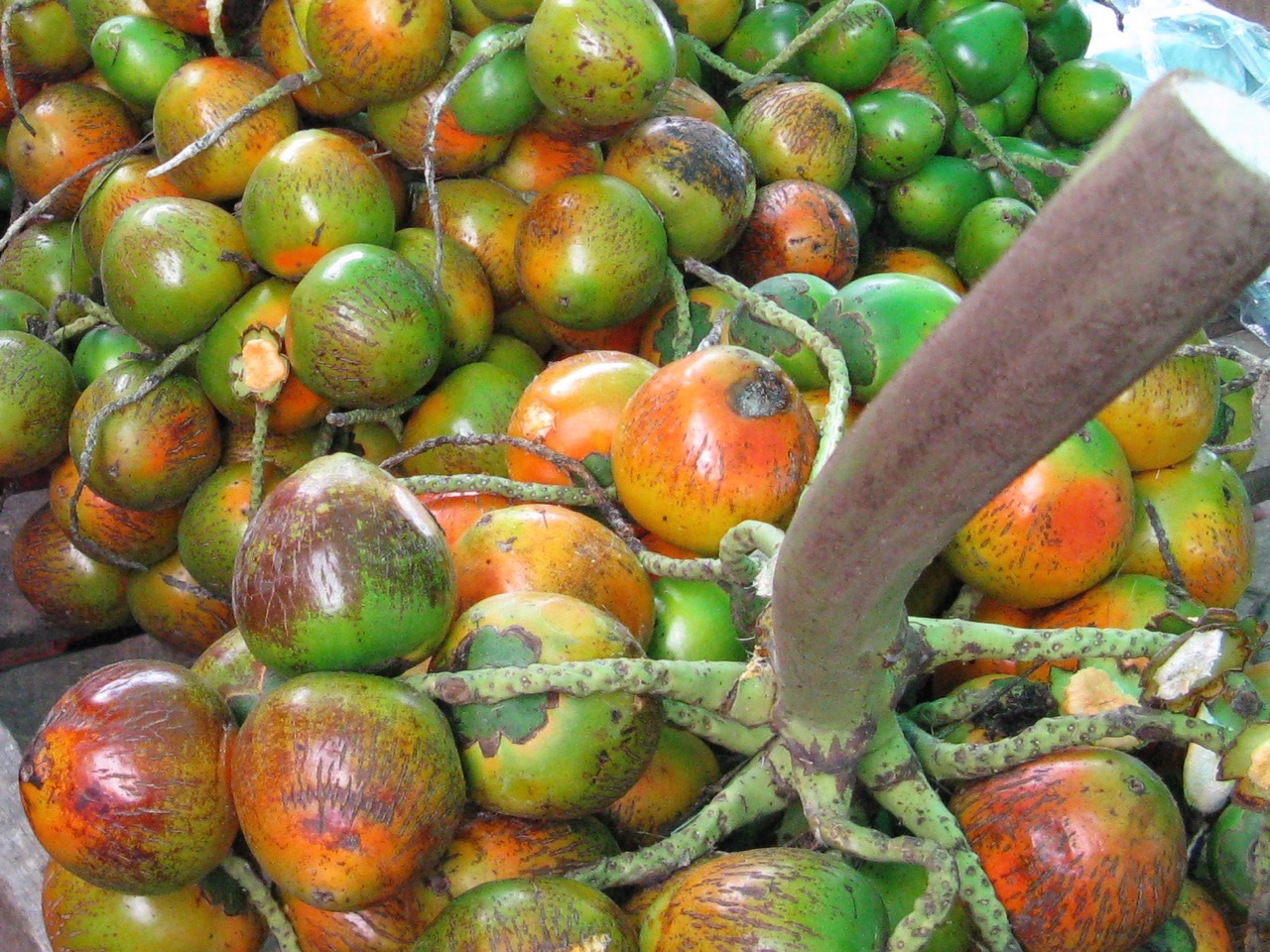 At least a dozen palms produce edible oils from their fruit pulp or from their seeds. (Yes, we know, the very last thing the world needs—possibly excepting nuclear war—is another oil palm plantation; but we’re growing just one Elaeis guineensis, the West African oil palm, because you can’t make Sierra Leonean ground nut stew without that crimson oil. In fact, most of those remarkable West African stews and “chops” would be impossible—unthinkable—without dende oil (125ml). And so on and so on.

Now please come to the table.

In a large, deep skillet or sauteuse heat one/half cup of palm oil (150ml). In it stir until soft 2 coarsely chopped onions. Now grab a really thick handful of greens and squeeze them tightly. Hold this big clump of greens down on a cutting board and slice through it crosswise producing a fluffy chiffonade of these strips. Put that in the pot. (In West Africa you’d use Cassava leaf—you could do that here in Hawaii too. But spinach or, even better, kale works fine.) Now put in chicken pieces—2 for each diner. Authentically, you’d leave the skin and bones attached, but go ahead and use boneless, skinless breasts—or, better, thighs. Next hot chilies. HOT. And, at last, a big glob of crunchy peanut butter (unsweetened). Stir this all together; thin with broth or plain water or coconut milk to a thick soup; add and taste for salt and cover tightly. Cook over low heat until the chicken is voluptuously tender. In the countries of origin this would be served with fufu—a stiff concoction made from cassava, yams or plantains usually—but go ahead and use a thick polenta or plain rice. Serve it with icy cold beer. And precede it with a palm heart salad dressed in a palm vinegar/palm sugar vinaigrette. And end the meal with coconut cake a la mode with peach palm ice cream and little bits of caramelized salak.