Five decades ago Donn Carlsmith began planting palms from all over the world just up the hill from Onomea Bay on the lush Hamakua coast just north of Hilo, Hawaii. Carlsmith was born in 1929 into the prominent Hilo family for whom beautiful Carlsmith beach is named. An avid plantsman, he promoted the introduction of palms into the local Big Island nursery trade and is credited with establishing much of the interesting palm plantings found throughout Hilo town and along its bay front in the 1970s. He was on the board of the National Tropical Botanical Garden, became the very first Hawaii Island Palm Society (HIPS) president, and was president of the IPS between 1978 and 1980. His Onomea garden was the grand finale to the first day of the 1980 IPS Hawaii Biennial. According to the trip report on the IPS website, the early garden already had about 275 species of palm.

“Onomea is expanding from a nucleus of mature palms, including striking Clinostigma samoense, into newly planted former cane field.  A heavy rain held off long enough for everyone to assemble under an awning for cocktails and alfresco dinner livened by a group of singers and a dancer and impromptu performances by some society members.”

The Carlsmith property was later subdivided, but care was taken to carve out a four-acre parcel to hold the heart of the garden, even going as far as relocating the palm that was the type specimen for Dypsis carlsmithii from another part of the garden.  This new species was described by John Dransfield and Jeff Marcus in 2002 from that single specimen in the Carlsmith garden. Later, two wild populations of the critically endangered palm were found in Madagascar.  Now 42 years after the IPS first visited Carlsmith, the 2022 Hawaii Biennial attendees can see the palm once known in cultivation as sp. “stumpy” towering over the garden today. 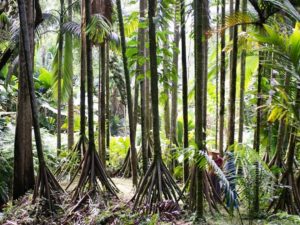 Mary Lock in 2015 with Karen Piercy in a grove of Socratea palms, some of the new plantings mentioned growing in the former cane field in 1980.

A friend of the Carlsmith family, Charman Akina, acquired the four-acre parcel and invited the IPS to see the garden during the 2004 biennial, HIPS was able to visit later in 2015.  With its groves of Socratea, Licuala, and Johannesteijsmannia, it was a top pick for the 2022 IPS biennial itinerary.  But it wasn’t obvious how to get an invitation.

Akina died in 2019 and left the property to the Hawaii Tropical Botanic Garden which sold it in 2021. Rick Kelley found out that the new owners planned to move to Hawaii but were still living in Austin Texas.  In a chance encounter typical for Hilo, Rick was standing in line at the Big Island Nurseryman’s Association Plant Sale with two palms tucked under each arm and wearing a HIPS t-shirt when the guy in front of him asked if he had a palm collection. They started chatting and it turned out that Rick’s new friend in the check-out line was Daniel Dayung whose father worked as a gardener for Don Carlsmith. Daniel helped his dad with planting in the garden on weekends starting in 1987 when he was in 7th grade. He has remained connected to the property in some capacity ever since and is now the caretaker of the garden working for the new owners Michelle and Ryan Rutan. Michelle and Ryan were thrilled to learn they had unknowingly bought a piece of one of Hawaii Island’s legendary garden estates.  They enthusiastically agreed to open their garden to IPS biennial attendees. Michelle even recorded a video message for IPS members that will be played during the IPS Biennial webinar on August 14. Michelle and Ryan with their young daughters have moved permanently to Hawaii and are living close by while they build a house on the property. They say they know nothing about palms but are eager to learn, and HIPS is delighted to introduce them to the fascinating world of palms. Daniel will be on hand to give a history of the garden. There will be several options for attendees to fit the garden into their trip. Those already registered will be contacted to make arrangements, for those that are still considering joining the biennial, register soon as some options to visit the garden are limited. 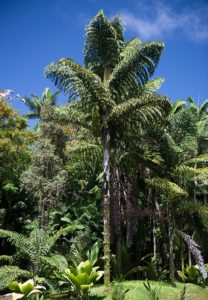 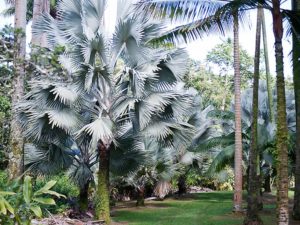