The Apalachicola River basin is one of the most biologically diverse regions in the United States. It’s also where I spent part of my childhood; now that I have my own kids, I relish every chance I get to both visit family and share this biological gem with my wife and boys. The 4th of July week was a perfect opportunity to do just that! 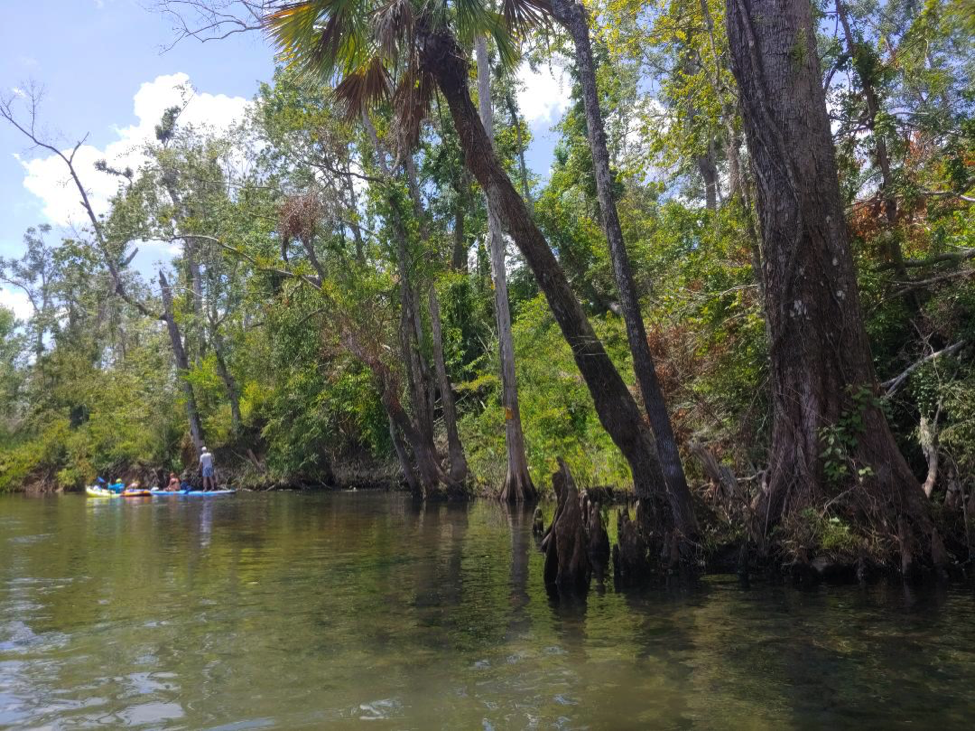 It only took us a little better than ten hours! Surprisingly, the kids were well behaved due to excitement of the beach and ample threats. Arriving to my grandmother’s beach house was both familiar and foreign. Some things were easy to recognize, but the damage from Hurricane Michael, which hit the area in October, 2018, was still apparent and sobering. All the oaks were mangled but surviving; pines were all uniformly snapped and laying in the same direction. Most of the Sabal,Butia and Phoenixwere alive. Tattered and sand blasted as they were, these palms had survived a Category 5 Storm! They were not the only ones either. My grandmother, uncles, sister, brother in law and several Allagoptera arenaria all survived and were happy to see us!

After a few days at the beach, it was time to go down a river! There are so many in the panhandle, that we had the luxury of being persnickety in choosing which one to go down. In the end, Econfina Creek won out. I had personally been to the major springs that feed a good portion of this creek, but this would be my first trip down it. The morning was hot and the creek, under the bridge was cold! After unloading all the crafts and taking the other vehicle to where we would end up, we set off!

It took us about 15 minutes to reach the first expanse of springs. They were off to the right and it opened into what looked like a gigantic fish tank. There was a total of maybe five different springs in this area, surrounded by a small island, covered in Bald Cypress and spider webs. We spent as long as we could here, snorkeling and admiring the pristine conditions. It wasn’t long before the sun started to rise, and the people began arriving, which was our cue to keep moving! So, we left to get back on the creek and rediscover the natural peace. Even though we were about an hour from where the storm hit, the landscape was certainly affected. It was the same old story of pines down and tangled forest due to strong winds. A few cabbage palms (Sabal palmetto) had fallen into the river, but that wasn’t a death sentence for them. We just navigated around them and kept exploring. There were HUGE bald cypress trees that had survived the storm and whatever else they’d seen during their ancient existence. 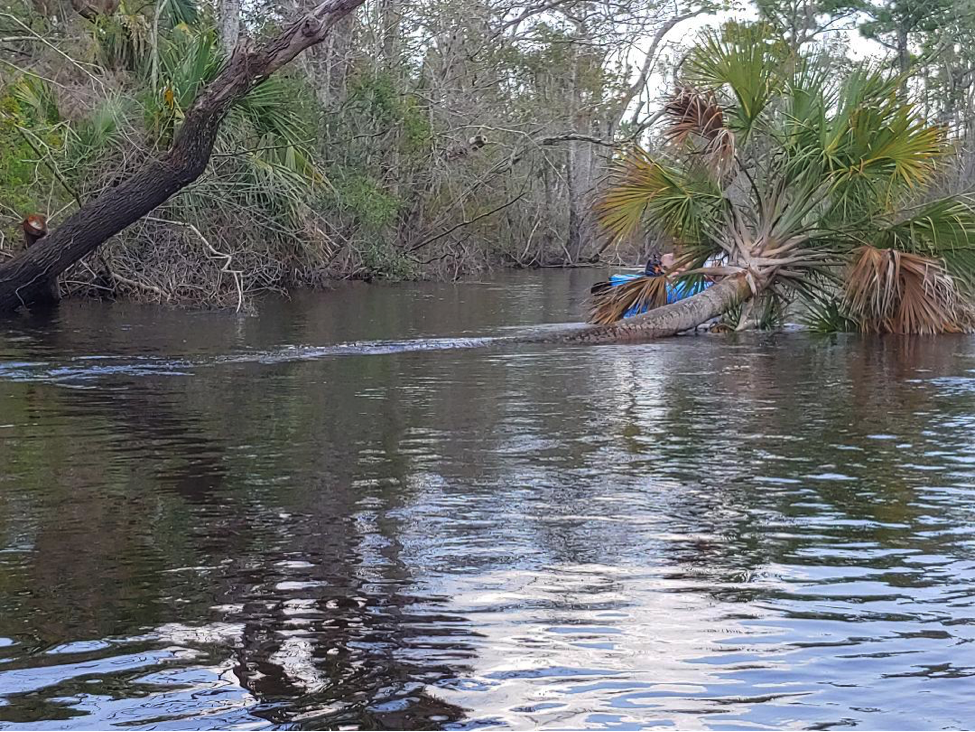 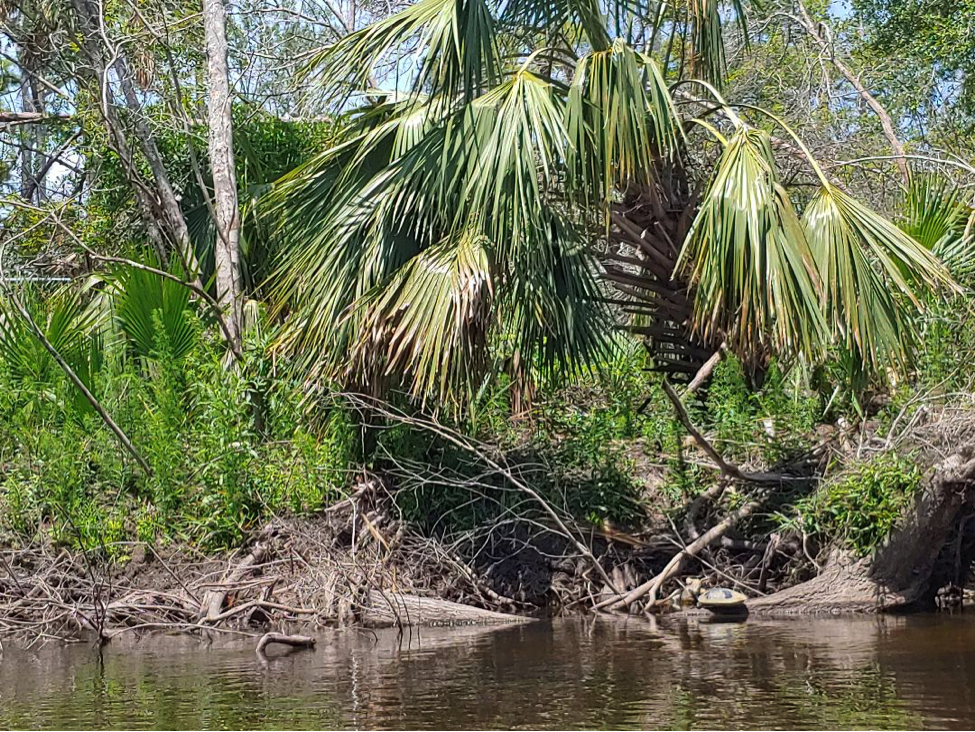 As we were on the fringe of the Apalachicola River Basin, we also saw many other interesting trees. There were gigantic Magnolia species! One of the most striking of flora was the large and silvery underside of Magnolia macrophylla. Another amazing sight was a needle palm, Rhapidophyllum hystrix, growing about a dozen feet above the creek. It was actually growing as an epiphyte among the tangled surface roots and low branches of another tree! Eventually the creek slowed down, and the banks got high and sandy. Serenoa repens could be seen doing its best imitations of the local needle palms. Near these high banks we saw a couple very large barred owls. This sighting, along with a small alligator, made the trip that much better!

Pretty soon, the creek slowed and widened with swamp on both sides. This was the signal that we were in dwarf Sabal minor habitat and that our trip was unfortunately coming to an end. As we pulled our kayaks and paddleboards onto the bank, I snuck off into a portion of the swamp to see what is certainly one of my favorite natives: it is known in the trade as ‘Blountstown dwarf’ but has a larger range than the name suggests. There they were, in the dark mucky crayfish mud! Little blue-green, flat leaves not much bigger than my head, and three to four of them at most. What a way to end an amazing ride! We ended up going down one more time, before leaving the beach and coming back home. I look back on this little creek that had four species of native palms growing on and in it and can’t help but feel privileged to have experienced its natural beauty. 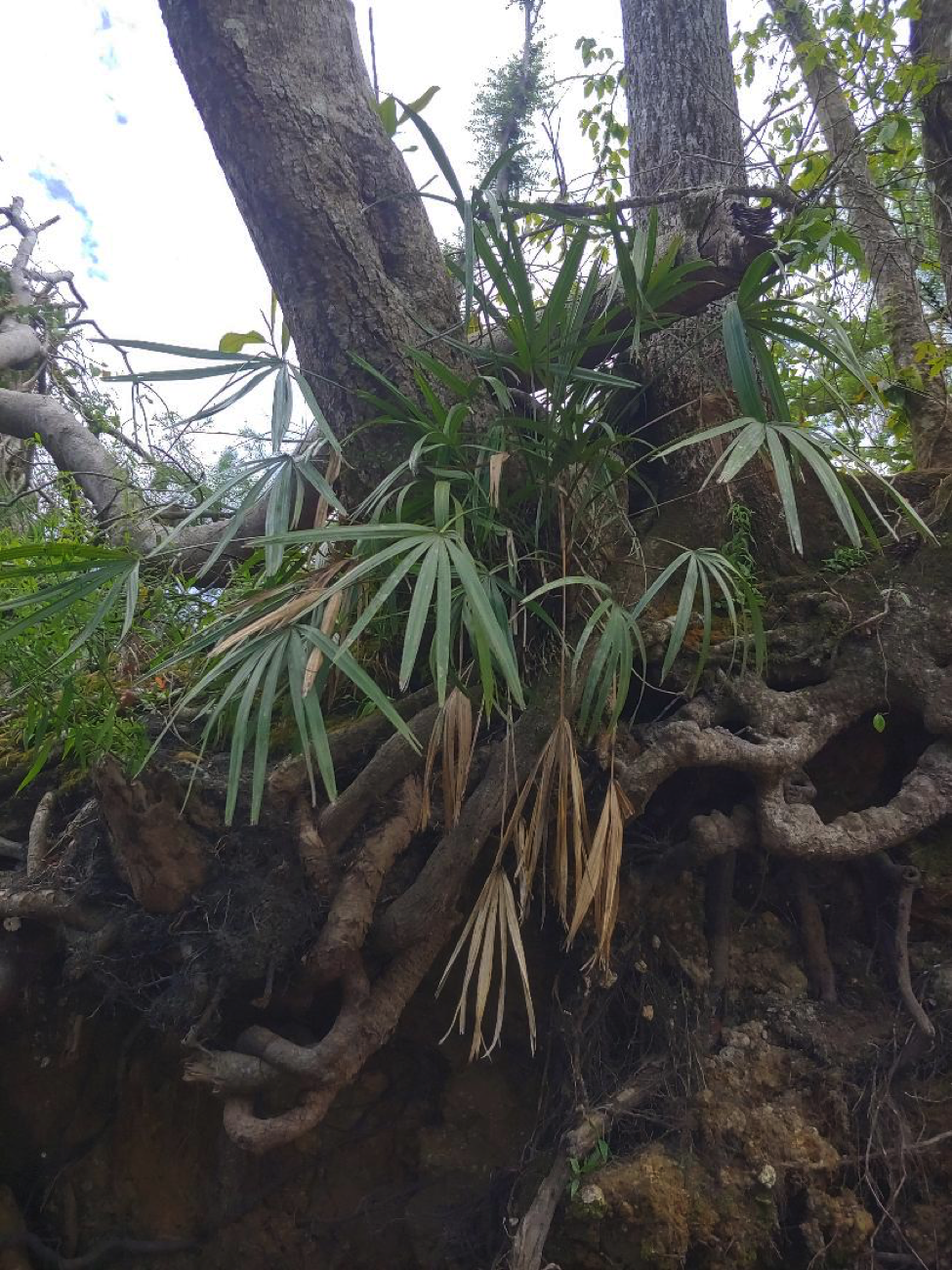