The following has been written by Larry Noblick, Montgomery Botanical Center

In January and February of 2014, I spent 6 weeks in Brazil traveling mostly with Harri Lorenzi or Ricardo Pimenta. Much of that time was spent in the field and the following are just ten days (January 8-17) copied more or less directly from my journal.

January 8: In the morning, while we waited for the truck to be ready, I spent time in the lab sectioning palm leaflets to examine and photograph under the microscope. At 11:40 am, we finally left Nova Odessa, São Paulo and spent the next 8 hours driving to Chapadão do Sul, Mato Grosso do Sul. The time changed as we crossed the Rio Paraná into the state of Mato Grosso do Sul, which gave us an extra hour of driving time. We spent the night in Chapadão do Sul.

January 9: Today, we lost that extra hour when we crossed back into Goiás on our way to Chapadão do Céu and the Parque Nacional das Emas. We left early and drove to km 23 on the road to Chapadão do Céu, Goiás. There we collected in a cerrado, now just a tiny fragment of the native vegetation that once existed in this area. Everything surrounding this fragment has been converted into soybean fields.

We collected a new species, a small coriaceous leaved palm that resembles Syagrus loefgrenii both in habit and size (Niblick 5631) but is distinctive. 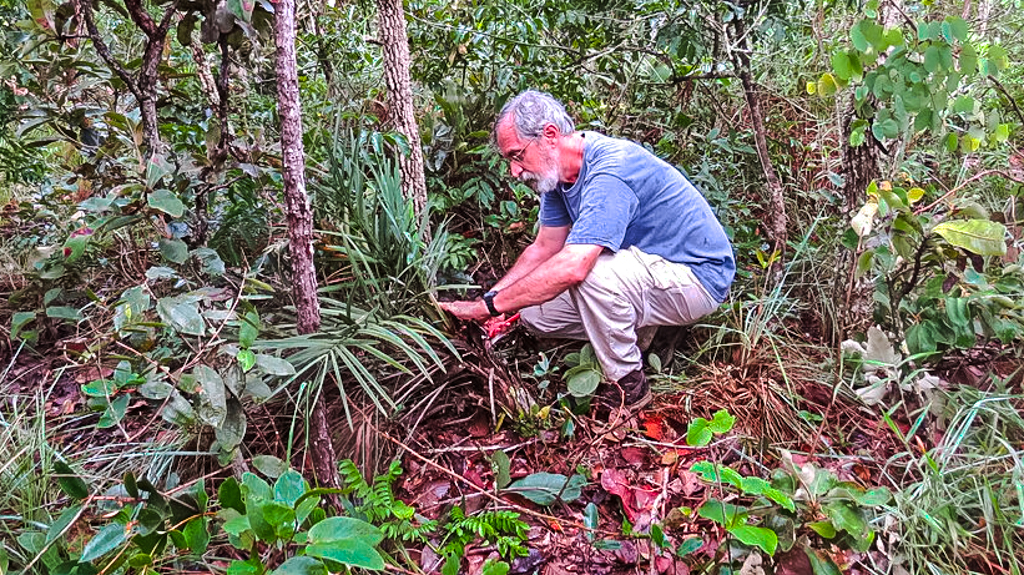 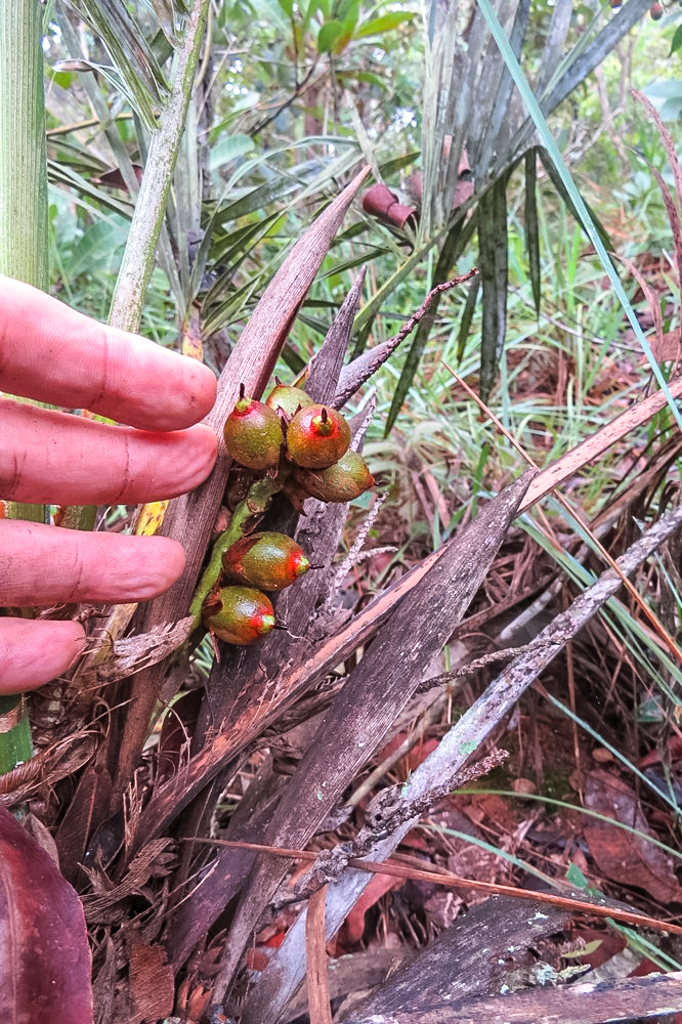 We then hurried on to Chapadão do Céu and on to the Parque Nacional das Emas. We drove straight to the park headquarters to show them our permits, which gave us permission to make scientific collections within the park. We then spent the rest of the day collecting in the national park, which encompasses an area of 30,000 hectares. In an open cerrado field near the park headquarters, we collected a new small Syagrus species (Noblick 5632, now Syagrus emasensis). 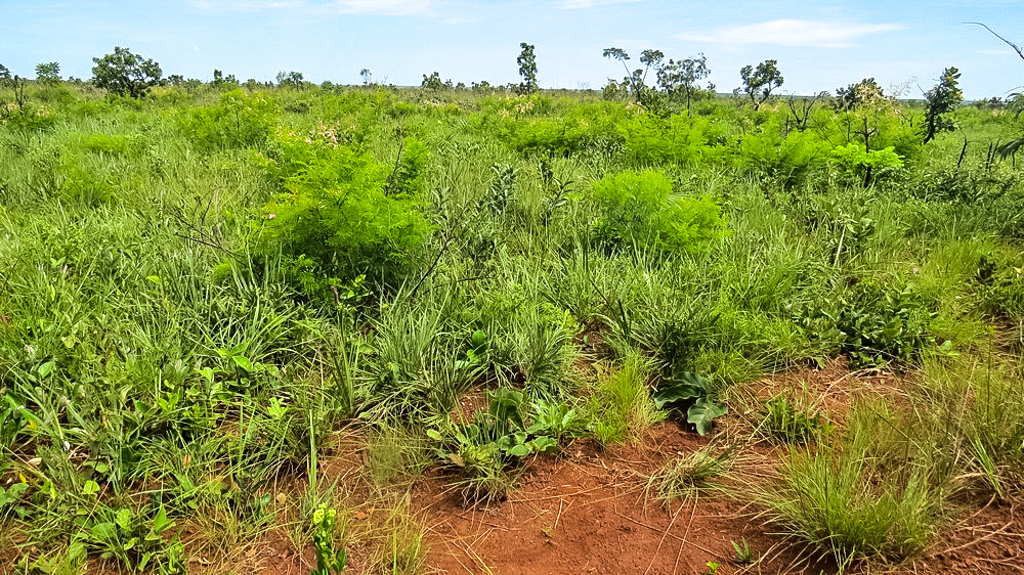 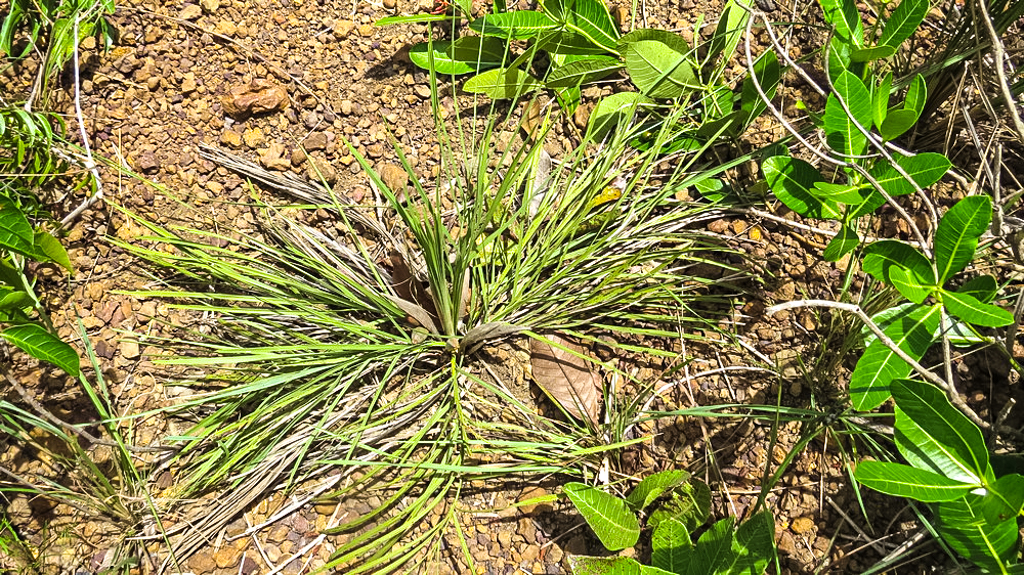 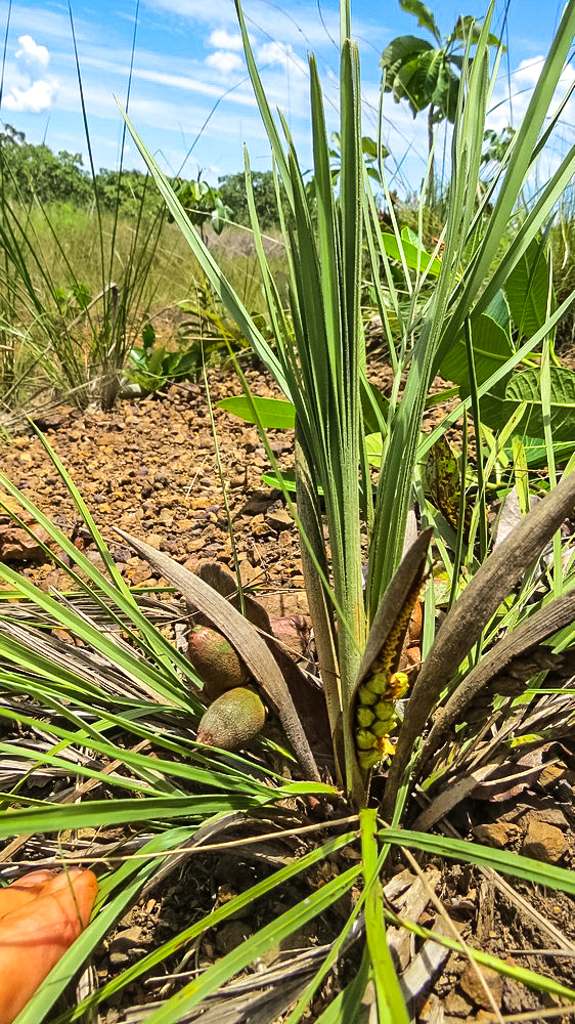 We also recorded Allagoptera campestris, Allagoptera leucocalyx, Syagrus procumbens, Mauritia flexuosa, and another small Syagrus that appeared slightly different with straighter leaves (Noblick 5633) than the new one (S. emasensis). Anatomically it was later confirmed to be identical to S. emasensis. At the hotel, I finished my measurements and finally went to bed at 1:40 am.

January 10: Early the next morning, we returned to the cerrado fragment at km 23 and collected more material and made additional measurements of Noblick 5631 [now described and identified as Syagrus menzeliana]. We then proceeded on to Rondonópolis in the more northern state of Mato Grosso, where Ricardo Pimenta claimed that he had found a new species of Syagrus and we spent the night.

January 11: The next morning, we went to the type locality for Acrocomia glaucescens, which is close to Rondonópolis, because that is the cerrado that Ricardo Pimenta said that he had found his new Syagrus species. We searched the cerrado thoroughly, but neither I nor Harri Lorenzi were able to find it. We saw only Acrocomia glaucescens, Astrocaryum echinatum and an acaulescent Butia. We learned later on our return that his new species had a remarkable resemblance to a Butia. We continued on to another cerrado and we saw 2 or 3 specimens of a small Syagrus with no reproductive material. I collected a leaflet for anatomy. We then drove north of Rondonópolis on MT-130 towards Poxoréo and found Attalea phalerata, A. speciosa, S. flexuosa (Noblick 5636, Shown Below), but no other Syagrus species. We drove back and spent the night in Rondonópolis. 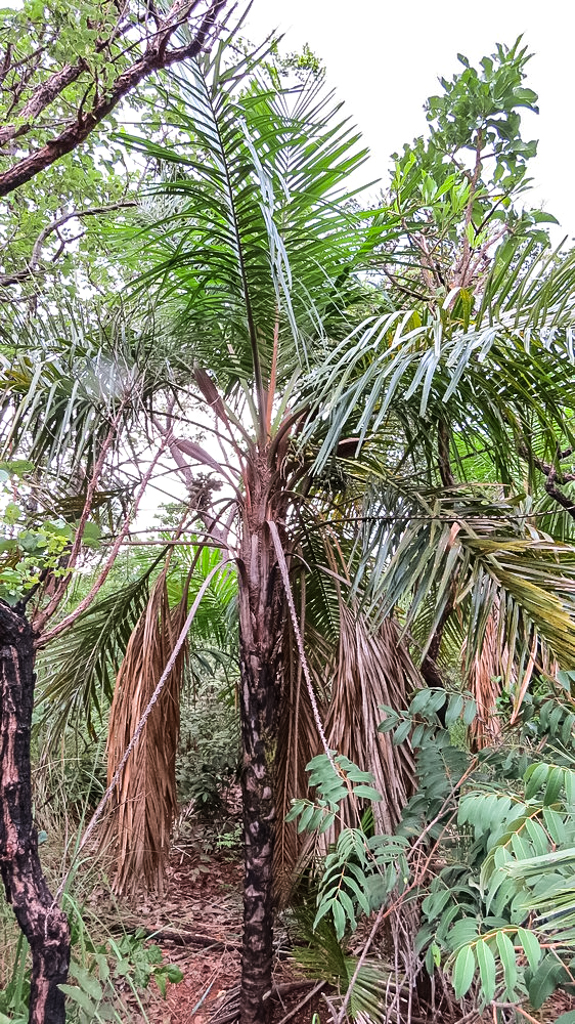 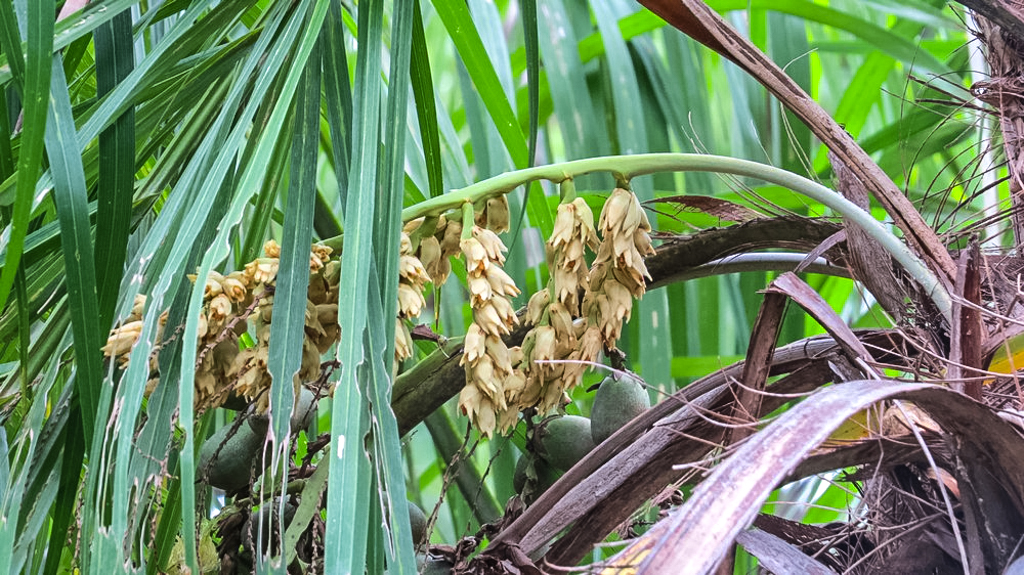 January 12: We left Rondonópolis, Mato Grosso, early and just north of Jaciara, we investigated an open cerrado and collected Astrocaryum echinatum (once thought to be extinct) in fruit. 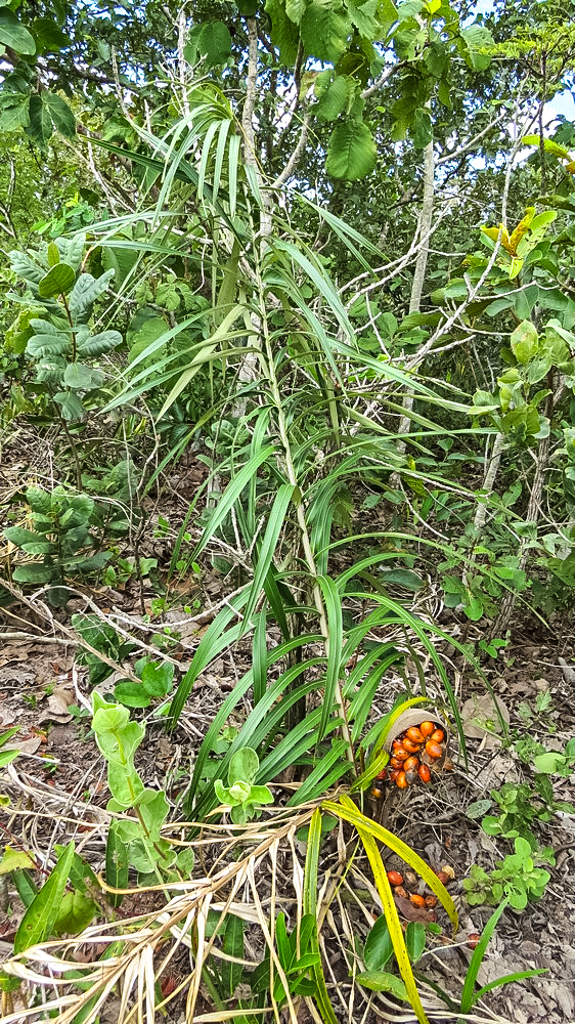 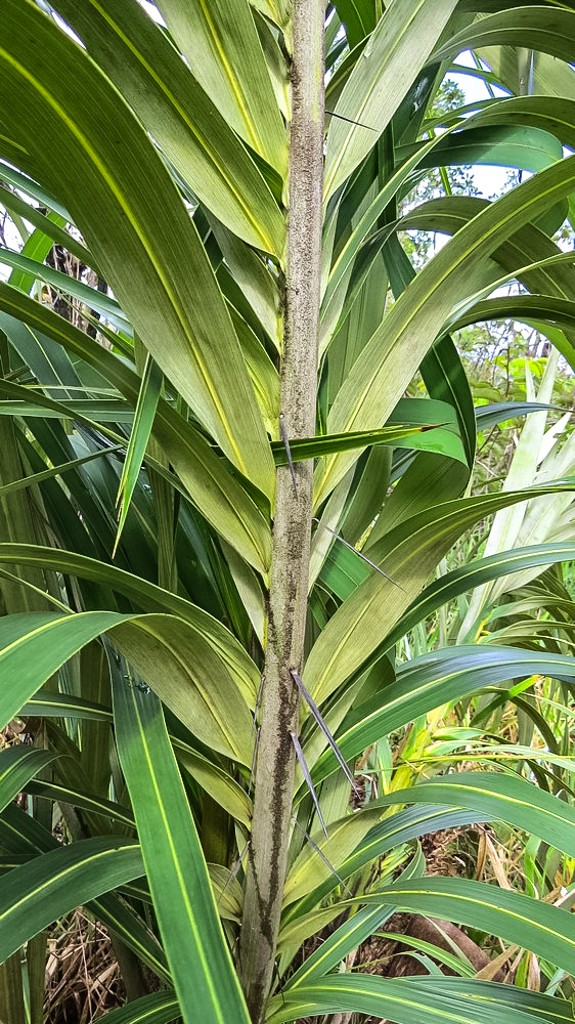 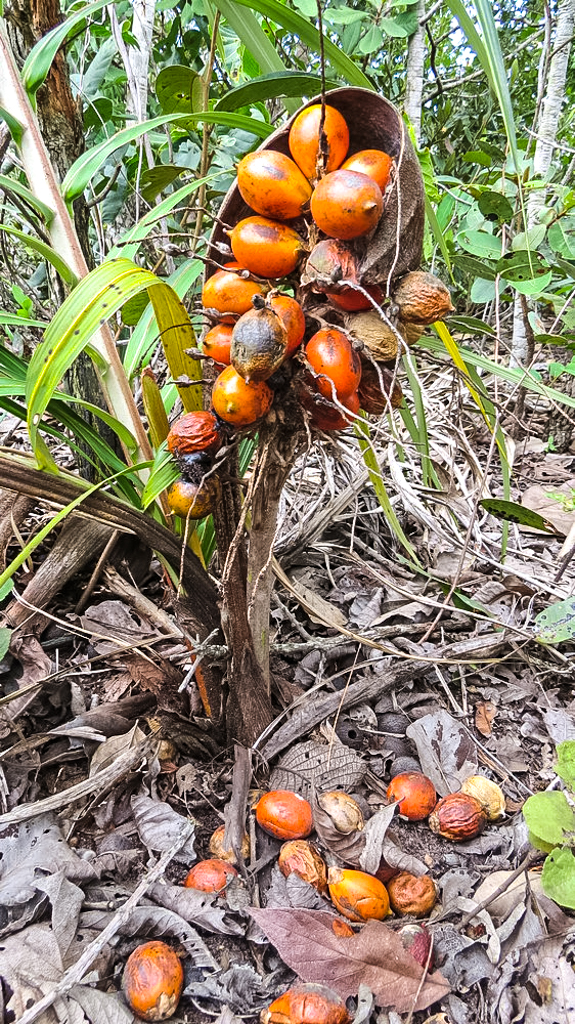 We then continued past Cuiabá to the Parque Nacional da Chapada dos Guimarães. We found a nice stand of Syagrus comosa with fruit (shown below), but I had to hurry the collection along as it was threatening rain and there was lots of thunder and lightning, but in the end little rain fell where I was. 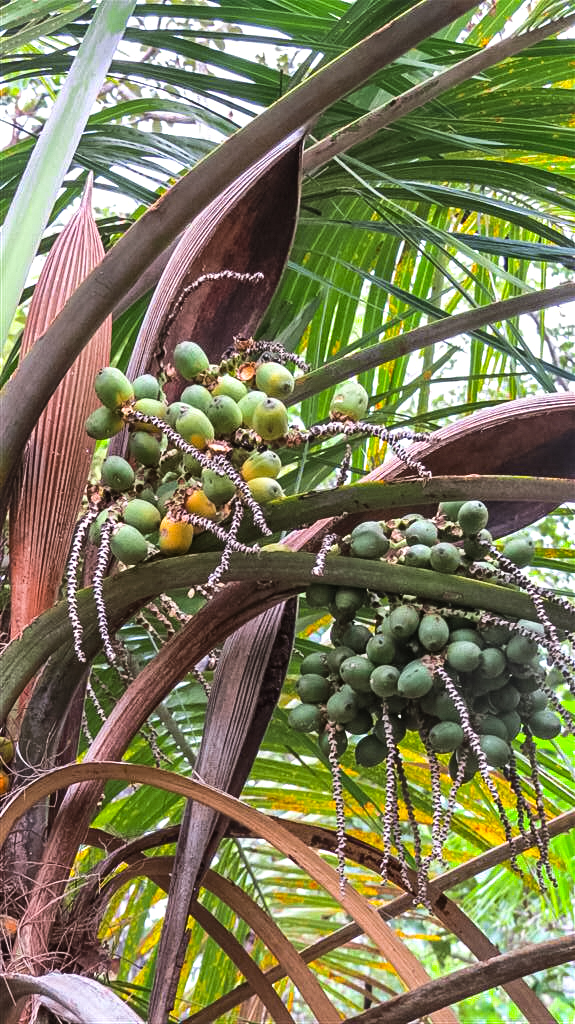 I was able to make five good fruit collections, but I was concerned that this fruit may be compromised by seed parasites (beetle larvae). We next drove to Monumento de Pedra (Rock Monument) and I found an acaulescent Syagrus in this area. It is not a large plant and it usually has very narrow leaflets. Its dark green foliage contrasts with many of the grasses. The palms are well camouflaged within the thicker grassy areas. However, in this area, the specimens were widely scattered. Next we drove to the Centro Geodesico de America (Geographical center of South America, first photo below). There was a wonderful view of the Chapada and we found a few specimens of this new Syagrus growing in the grassy cerrado near the outlook and monument. We then left there and headed back to Cuiabá. I spent the evening (and a large part of the night) measuring plant material and pressing plants. 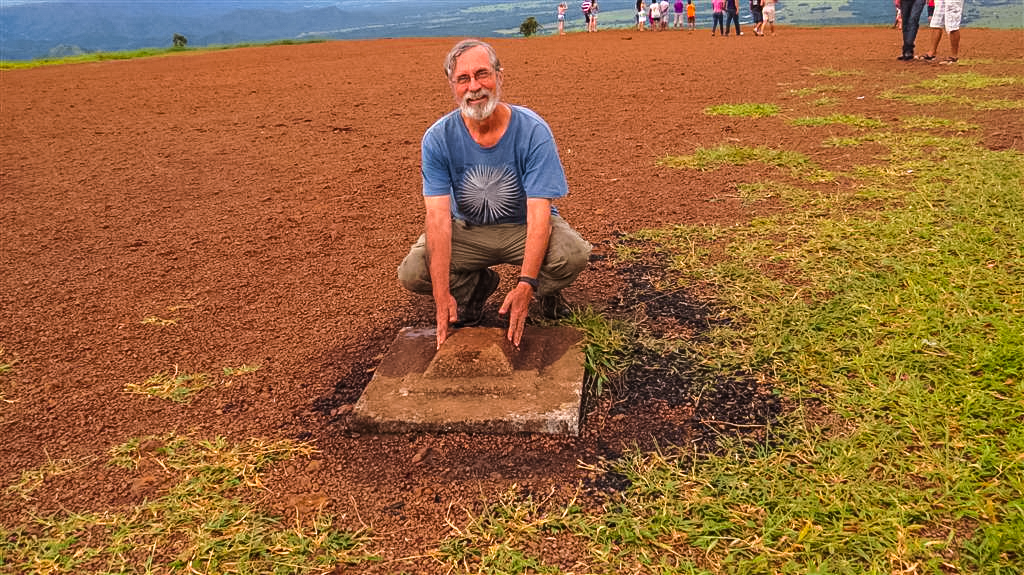 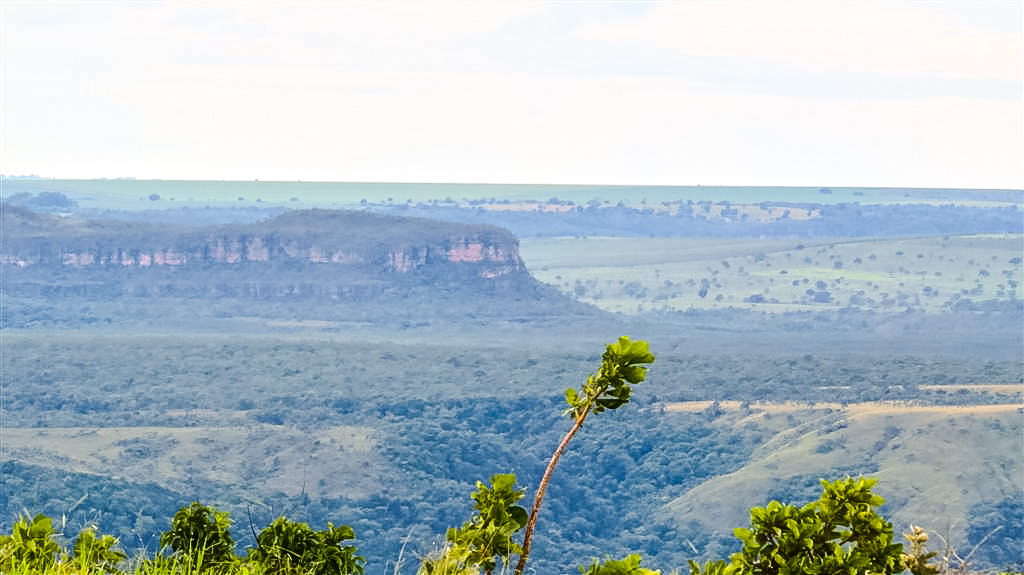 January 13: In the morning, we went to the Federal University to check out their dried palm collections. Then we went to the National Park Office (Chapada dos Guimarães). After showing our permit and obtaining proper permission, we collected 10 specimens of the new species, Syagrus guimaraesensis, near “Bridal veil Falls”, close to the park office. 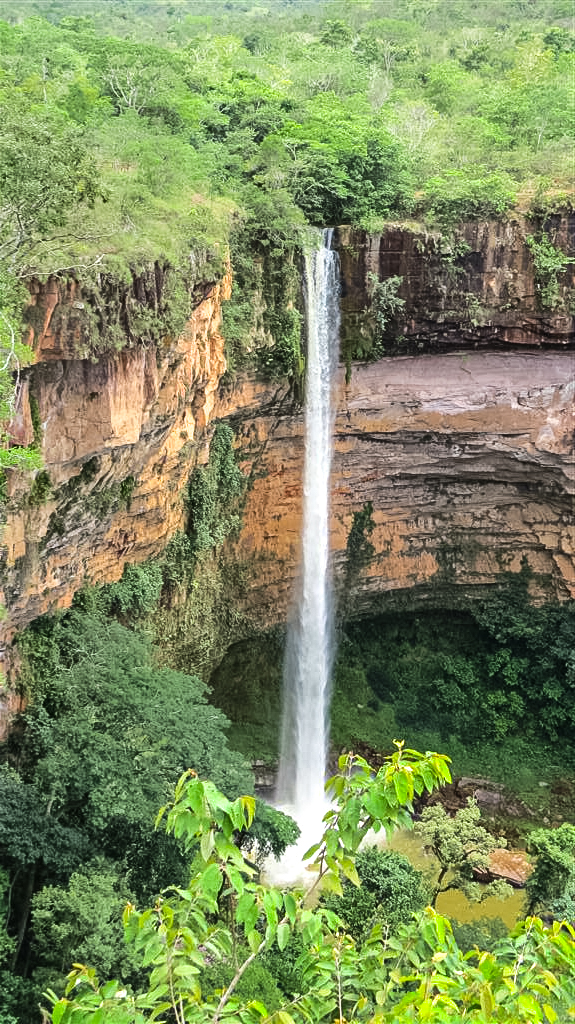 Syagrus guimaraesensis is abundant here throughout the grasslands, but difficult to see when the grass has not burned for several years. 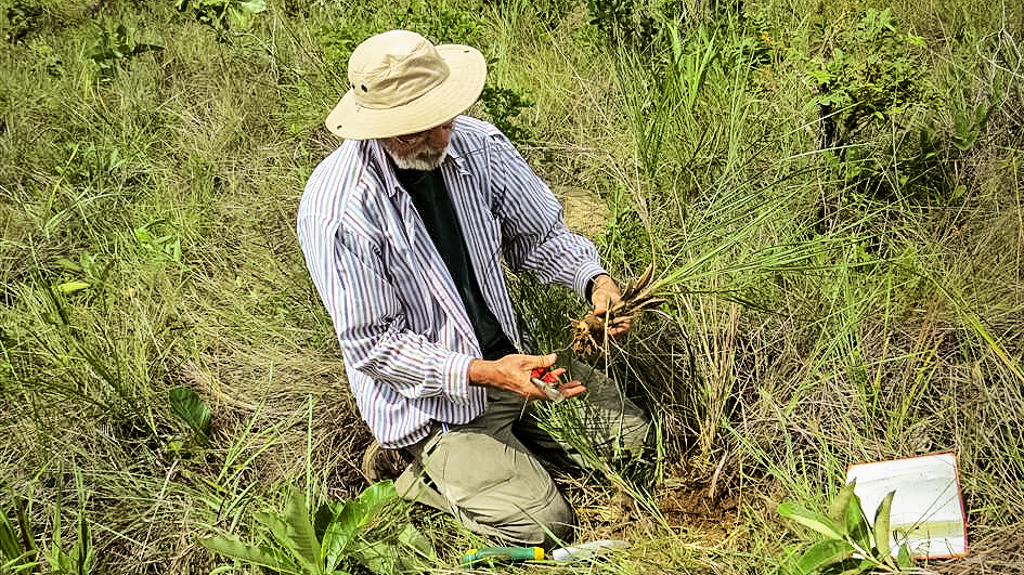 There were few plants flowering in January and even fewer with ripening fruits. As we were parking the car at the park office near “Bridal Veil Falls”, Harri noticed a problem with the steering. Then as we were leaving, we noticed that the battery was not charging right, the steering was difficult, and a short distance down the road we began to overheat. We discovered that the hydraulic pump went bad, put pressure on the pulleys and caused the serpentine belt to slip off. That serpentine belt is directly or indirectly responsible for recharging the battery, running the fan to keep the engine cool, and operating the power steering system. We would have to wait until late the next day for the new part to arrive from Cuiabá. So we stayed the night in the village of the Chapada dos Guimarães.

January 14: The next day the part to fix the car arrived about 1 in the afternoon, and by the time they put it in and reassembled the truck it was nearly 3:30 before we could leave. We then drove east towards Primaveira do Leste (where we were supposed to spend last night). Our goal was to try to make it to Barra da Garças, Mato Grosso, which lies on the border with Goiás. Just as night was falling, we were passing the area near General Carneiro where the type collection for Syagrus pleiocladoides was first collected. We stopped briefly to photograph it in the fading light and then continued on to our destination near the Goiás border, where we spent the night. 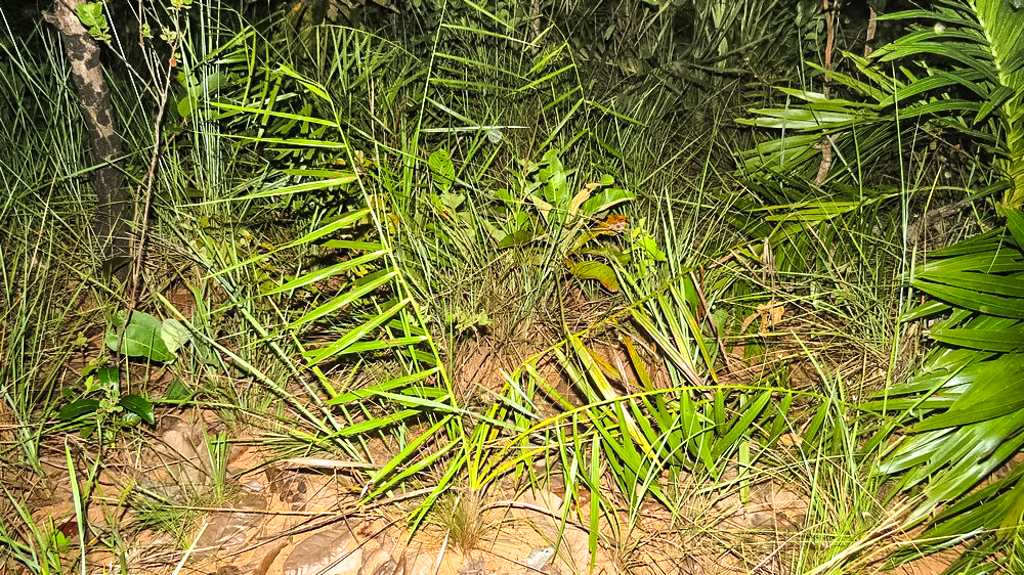 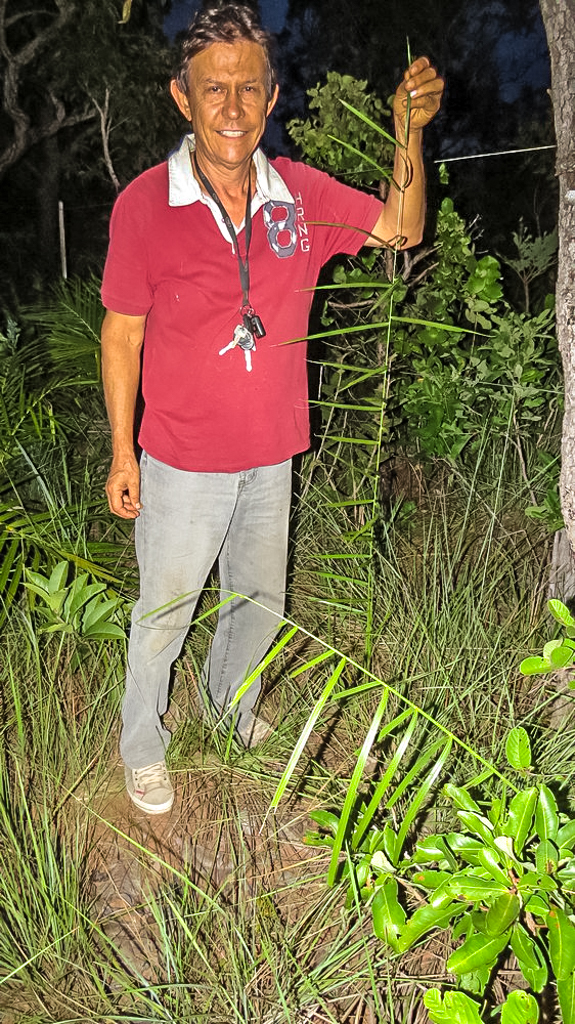 January 15: Today, we proceeded on to Niquelândia, Goiás. We drive hard for the first 6 hours. Just east of Uruaçu, we found a population of Attalea eichleri. 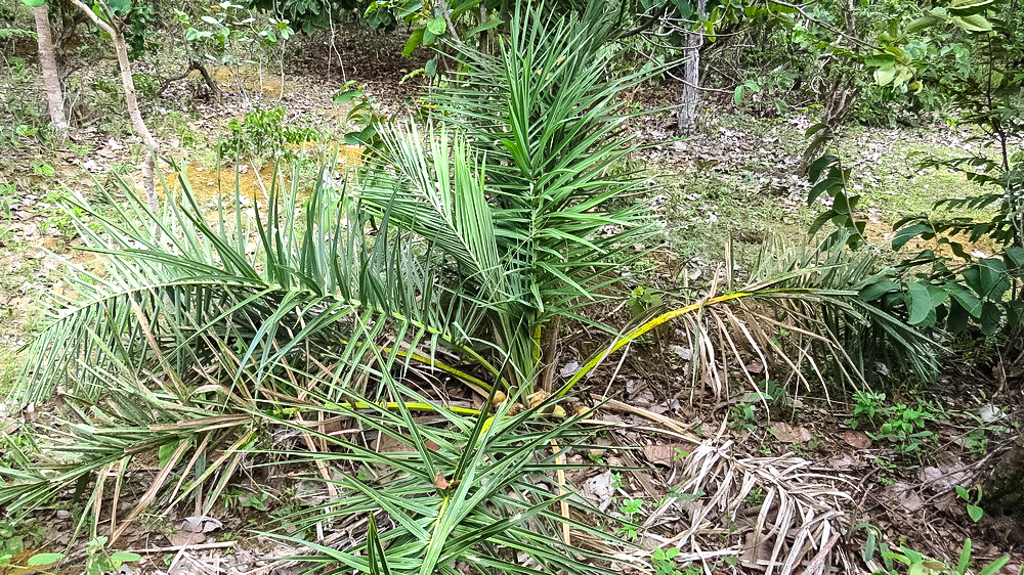 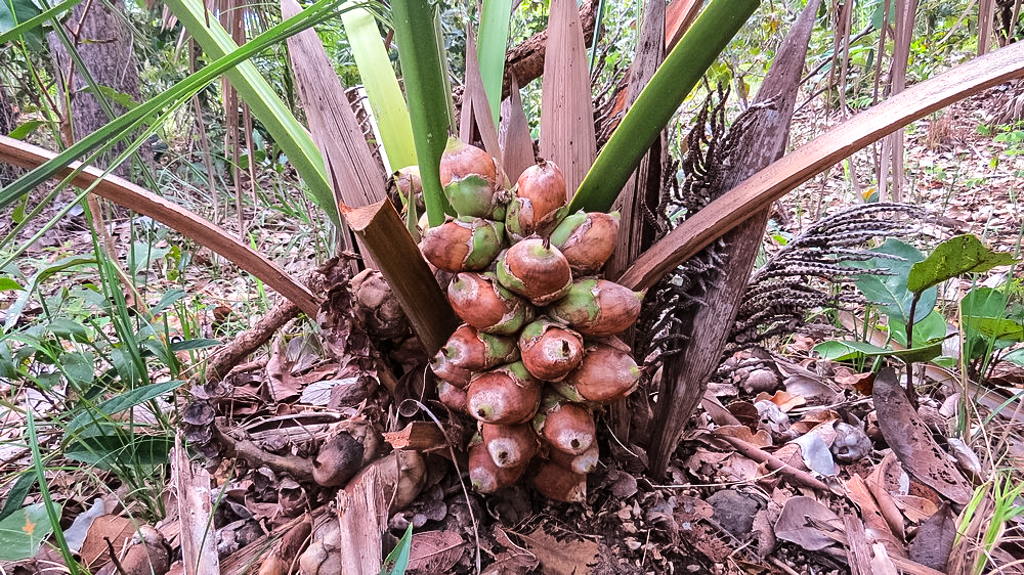 Most were short, but there was one very large specimen that I collected fruit from (a hybrid of A. eichleri with A. speciosa? Noblick 5641). 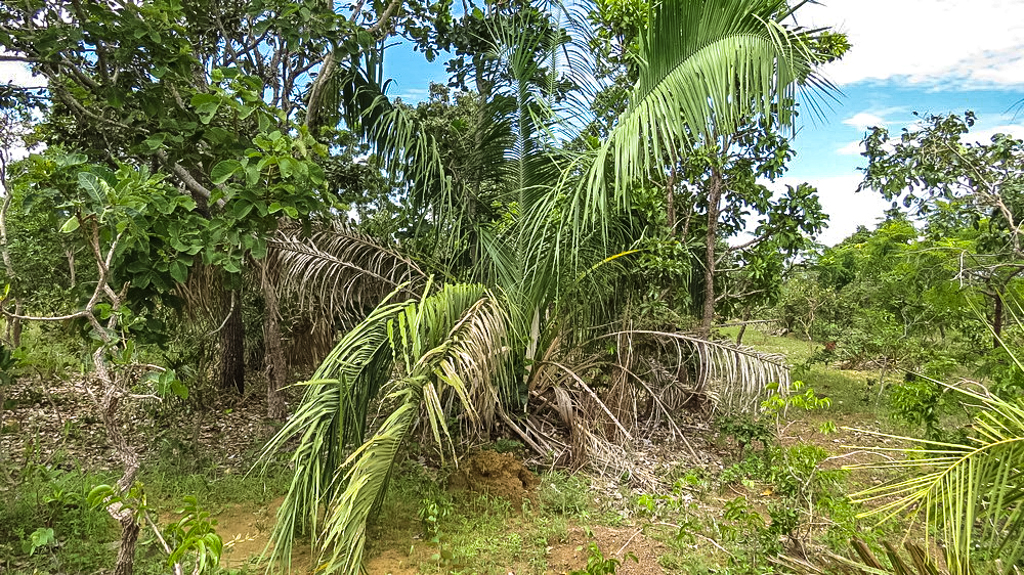 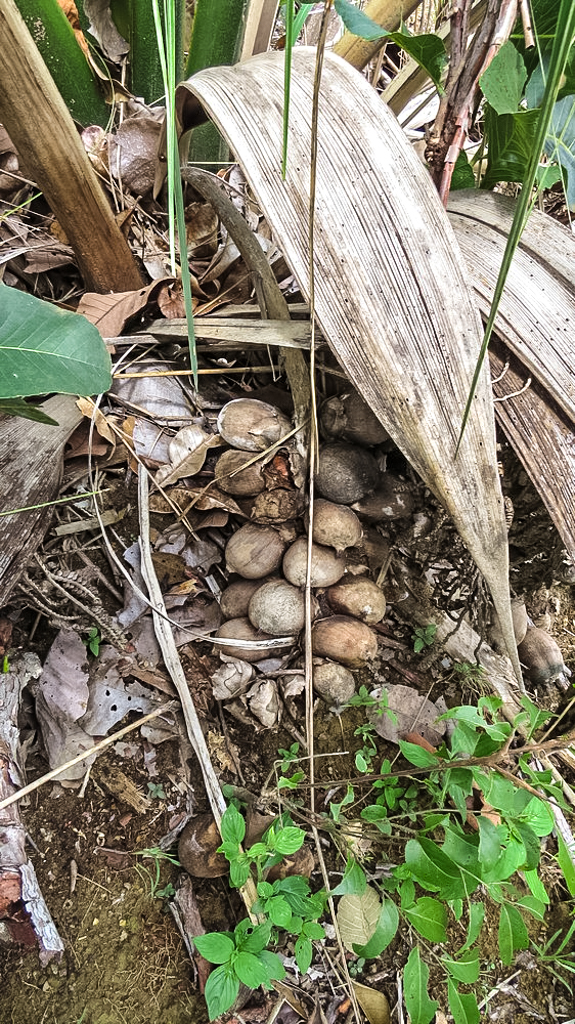 I collected one small leaf and one very large leaf. I collected two immature infructescences for the voucher specimens. Next we headed for a short distance onto a side road that turns south off of the main Urucaçu-Niquelândia road and heads in the direction of Barro Alto. We just went a short distance on that road before we encountered the Syagrus species that our friend Vinicius Souza had collected several years before. We found the palms growing along the roadside between the road and the fenced in areas where the cattle grazed. 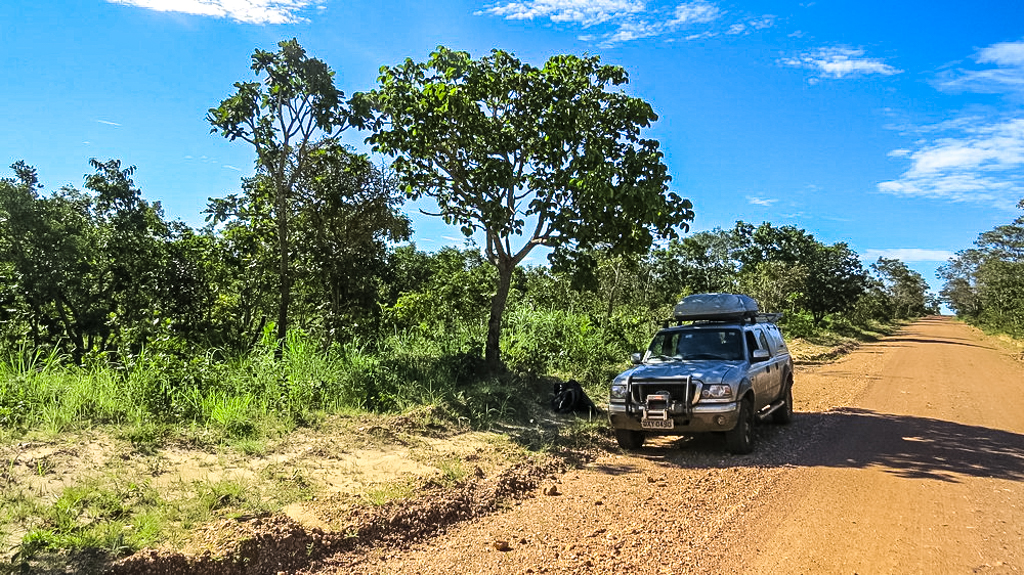 I collected several specimens (Noblick 5642). I originally thought that it might be Syagrus longipedunculata, because of its long peduncles. 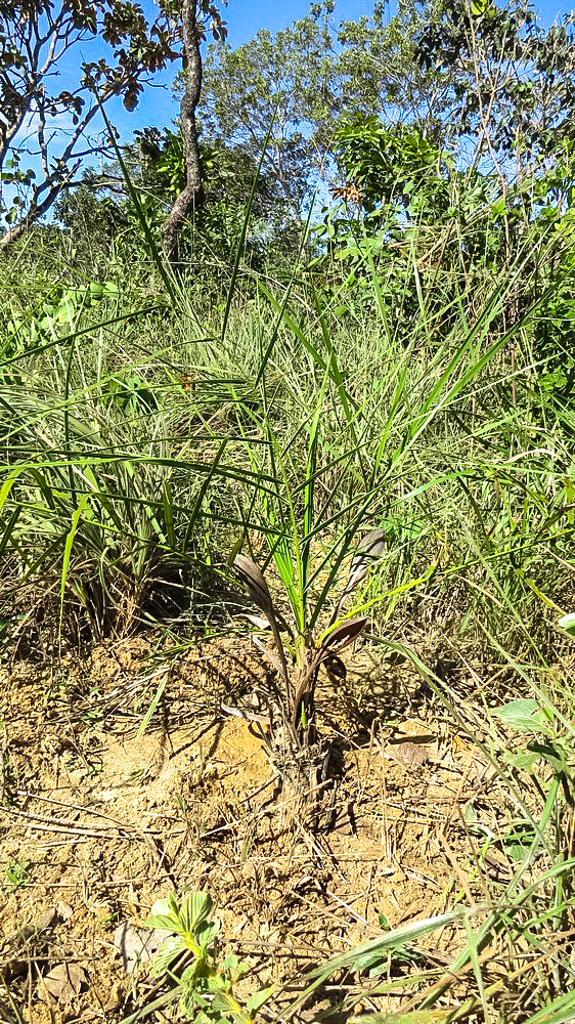 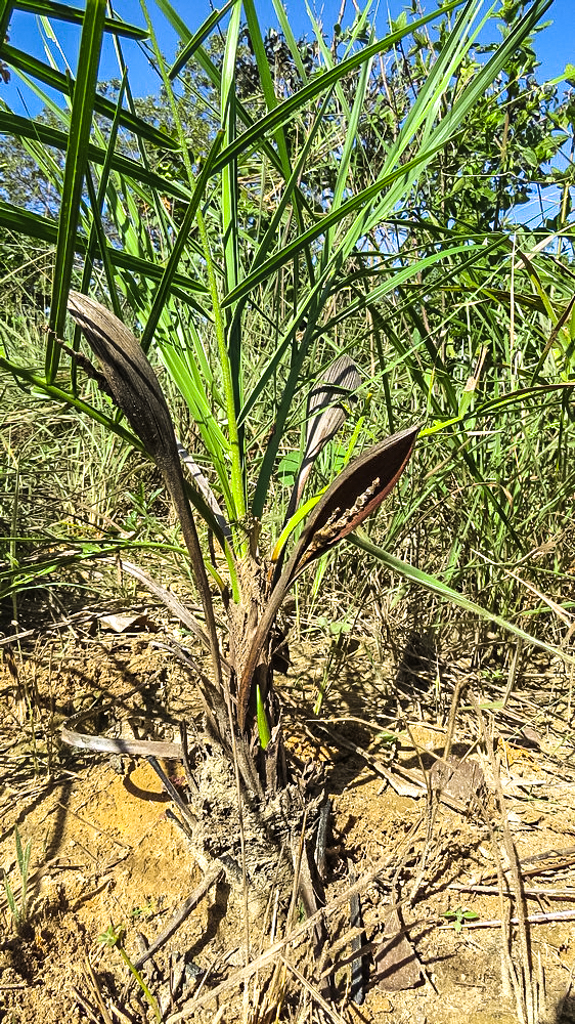 However, now I believe that it is a form of Syagrus glazioviana, which leaflet anatomy helped to determine. We returned to the road to Niquelândia. Niquelândia was so named for the large deposits of nickel ore discovered in the area during WWII by some Americans searching for resources to help in the war effort. We drove slightly east of Niquelândia looking for the type locality for Syagrus longipedunculata. After taking the wrong road and ending up at the nickel mining operation, we retraced our steps and arrived at the type locality close to dusk. These plants grow in very poor, nickel-rich, gravelly soil. These areas have been fenced and are currently being used as pasture. These palms are therefore not protected. They appear to be a very distinctive species, so we were correct in describing it as a new species, S. longipedunculata. However, this was the first opportunity I had had to personally see It in the field. The leaflets are held in a shallow V, much like the genus Butia, but the leaf blade is not so arched and looks somewhat bluish under low light conditions. 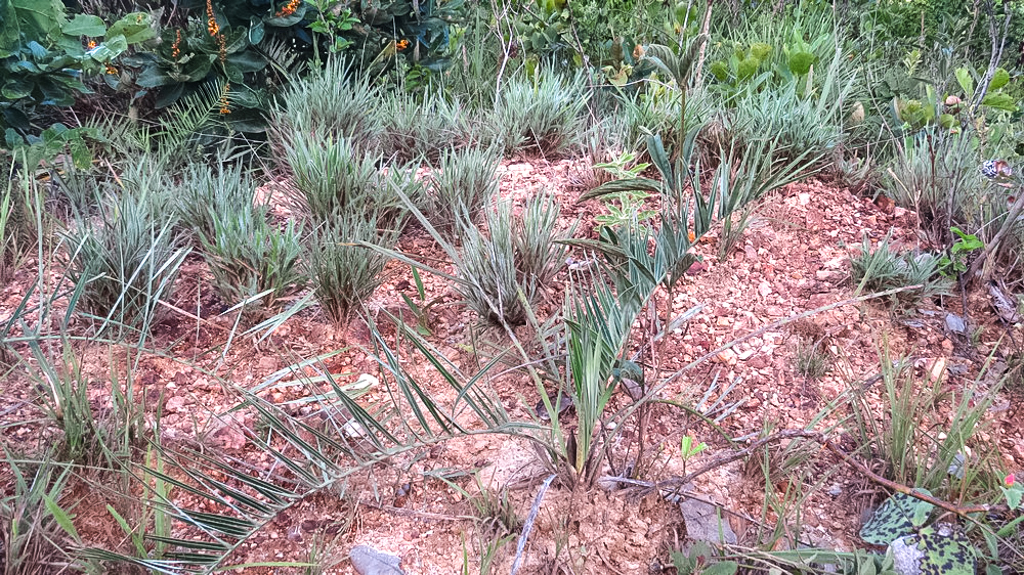 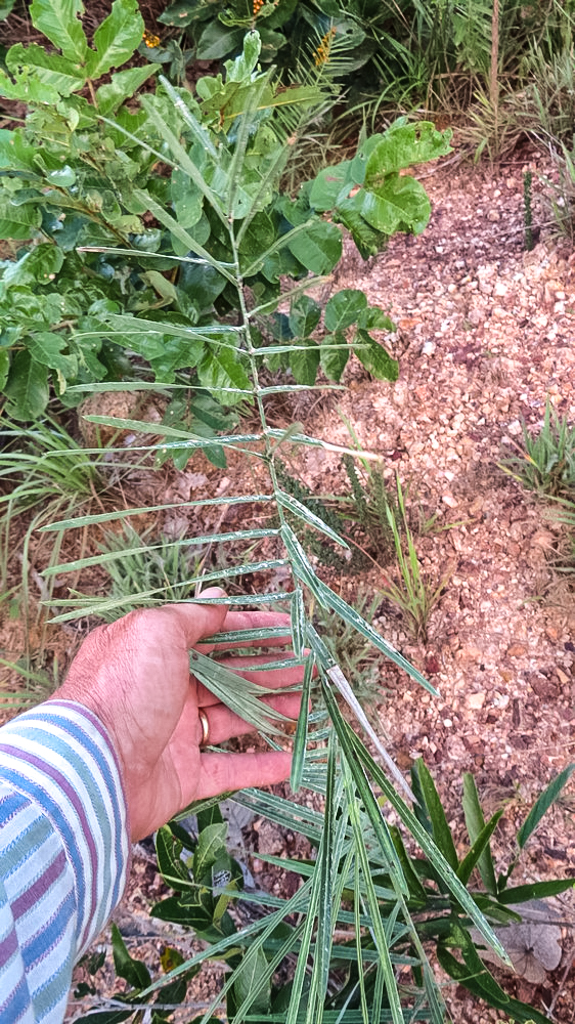 I collected several duplicate specimens (paratypes)(Noblick 5643) to compare with the first one we had collected (Noblick 5641) along the road to Barro Alto and discovered that they really are different from each other. I made a note to compare their anatomy. I spent the evening pressing and measuring palm material until 4 am.

January 16. Still in Goiás, we headed south on BR-414, and we stopped at a few cerrados along the way to look for palms. We found the same one Vinicius Souza had collected (S. glazioviana), and when we finally arrived at Senador Canedo just east of Goiania, we determined that the palm previously collected there and thought to be new was also just a form of S. glazioviana. In the same field, I found a leathery and thin-leaved, membranaceous leaved individuals, but they all appear to be the same species. I am finding the diversity and variability of S. glazioviana to be very challenging to understand. Since we finished up earlier than expected, we drove to the small village of Meia Ponte, which we thought was close to Morro do Frota, the type locality for S. glazioviana. We discovered that it was the wrong Meia Ponte and no one had ever heard of Morro da Frota. We continued south and spent the night in Itumbirana on the Rio Paranaíba on the border with Minas Gerais.

January 17: We headed for home today. I have learned that much of Brazil has been converted to pasture, soybeans, corn, and sugarcane fields. There is very little cerrado left and what little there is has been fenced and is being grazed by cows, who love munching on the acaulescent Syagrus species. Areas which I thought would be pristine are mostly devoted to soybean production that is being sold to other countries. The grand cerrados have been reduced to small fragments. Yet, even in these small fragments new species can be found. We arrived home later that evening.