If you are truly interested in conservation, then chose to protect one of our most unique plant species, the genus Pritchardia. If you think that coconut palms, kukui, bananas, taro and ti are natives and seem to grow easily, then it is time to rethink!  These plants are alien, non native species brought to Hawaii by the Polynesians as they migrated across southeast Asia and the Pacific Ocean. These are referred to as canoe plants.

For example, our state tree, the Kukui originated in what is now Indonesia, it is believed. Our state tree probably should be the Loulu Palm genus because it is endemic. That is, it found only in Hawaii. Of course there are exceptions to this. Four species are found in the south Pacific. Two species were only recently discovered. The Hawaiian loulus actually evolved here and are found growing naturally only in Hawaii. At one time, there may have been many dozens of species, but with the introduction of the Polynesian rat and pig, many must have perished. Later introduction of grazing animals did further damage so that now there are only remnants of what must have been vast populations of the loulu.

The native Loulu group or Pritchardia Palms are truly a vanishing species in Hawaii.  Of some 28 species of Pritchardias in the world, 24 are natives of Hawaii. The others are found in Fiji and the Tuamotos. 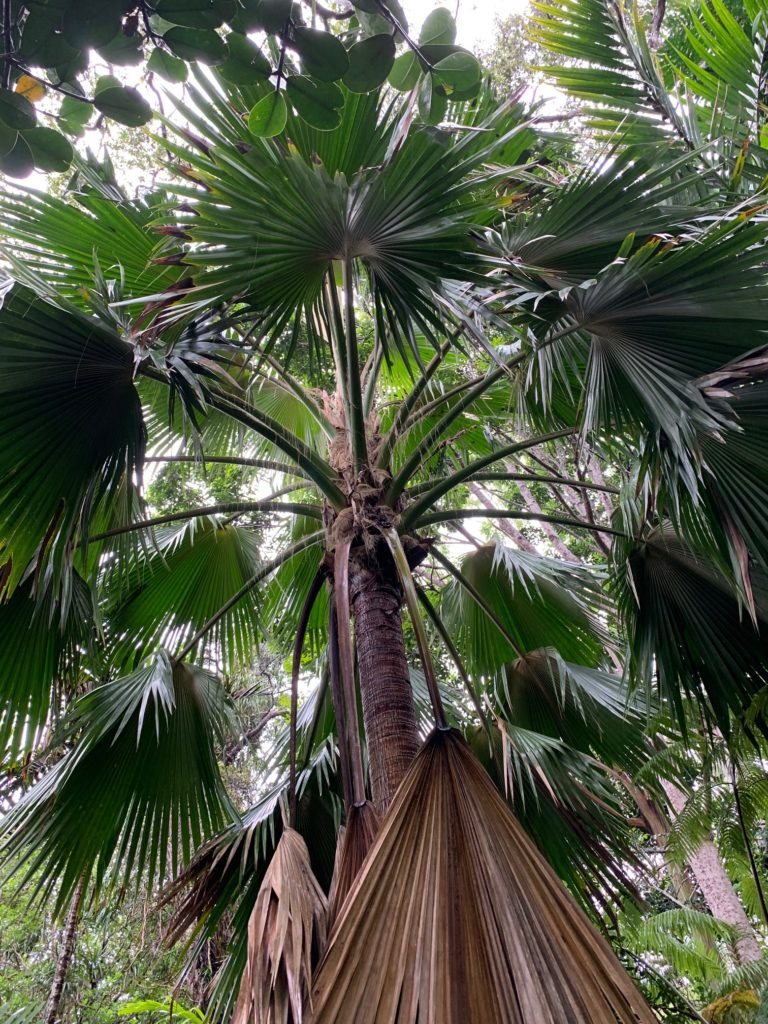 It is a shame that many of these species have declined in number to the point that they are almost extinct. It s suspected that there may have been other species present on other Pacific islands, but have probably disappeared as humans with pigs and rats migrated though out the tropical Pacific thousands of years ago.

In Hawaii, the Kona Loulu or Pritchardia, affinis or also know as Pritchardia maideniana is a tree from Puna, Kona and Kau.  These palms were at one time found abundantly from Kalapana along the coast to Punaluu and the Kailua area of Kona, a distance of more than 150 miles.  Today, only occasional isolated specimens can be found.  Few seedlings appear around the parent plants.  Without man’s help, they too will disappear. Another specie, Pritchardia schattaueri may also have been common at one time in upland areas of leeward Hawaii, but was reduced to just a few trees near Honomalino when identified as a new specie late in the 2oth century. 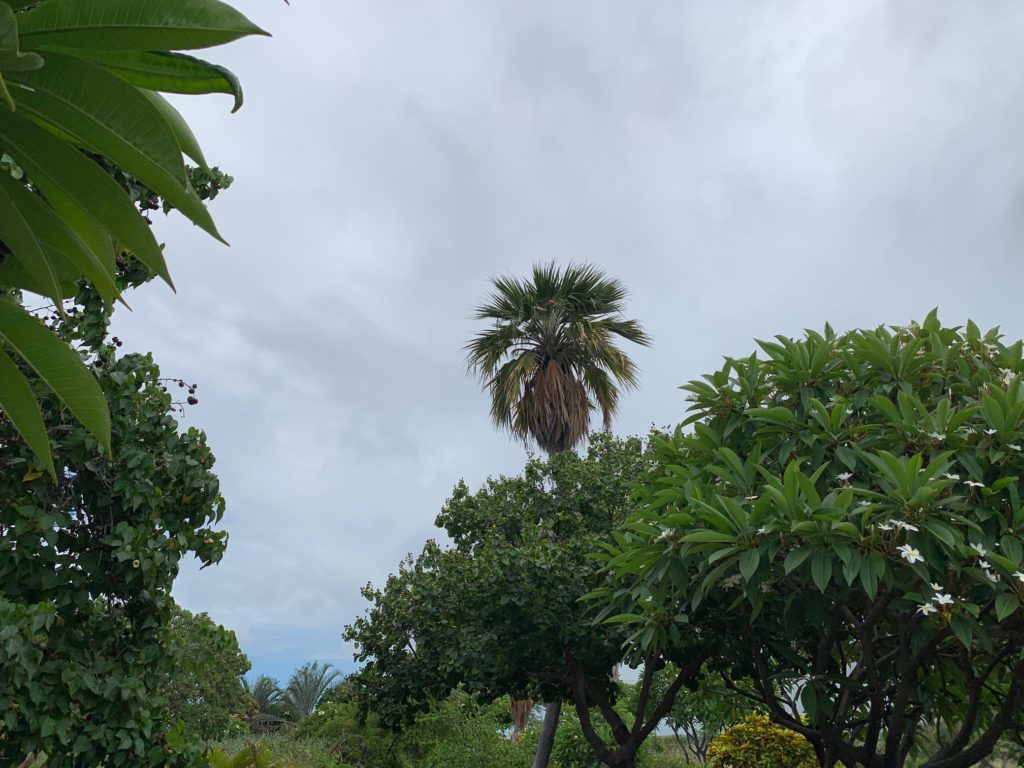 Otto and Isa Degner published an article in June, 1971, Phytologia (Vol. 21) that speculates as to why the decline.

They wrote that on the island of Hawaii at Kaliilii, near Wahaula, within the Volcano National Park, a few impressions of prostrate trunks can be seen on a prehistoric, though not very old, pahoehoe lava flow.  Beyond the South Western boundary of the National Park between the main road and the ocean, at Kawaa, lies an expanse of prehistoric, smooth pahoehoe.  Here, the pahoehoe had gently flowed through a palm grove, the wet trunks burning slowly through the base so that the trees fell helter-skelter upon the cooling lava.  The writers are convinced that the Loulu reached the Hawaiian Islands some eons ago and may have more or less encircled many stretches of the islands with extensive groves, particularly before the Polynesians bought the pig and perhaps, as a stowaway, the seed eating Polynesian rat.  The fossil impressions at Kaliilii and above all at Kawaa are irrefutable proof of this fact.

By 1969, the Kona Loulu, Pritchardia affinis/maideniana was close to extinction along the Kau coastline unless measures were taken to insure its survival.  Fortunately, C. Brewer and Company, Ltd., the major landholder in Kau had just embarked on a resort development in the region and was developing a large nursery to supply materials for landscaping the project.  The company was interested in locating and propagating plants adaptable to this dry, windy region.  It was felt that the native plants of the region should have first consideration since they had proven their worth under Kau’s climatic conditions.

In 1970, seeds of this palm were collected at the Beamer home adjacent to Punalu’u Black Sand Beach.  The seeds were planted in flats and grown to landscape size.  Today, several groves are beautifying the Punaluu area of Kau.  Trees from this batch of seed also found their way to the King Kamehameha Hotel, Kona Outdoor Circle garden and many other sites around the island. Seeds distributed by the Hawaii Island Palm Society to California and even southern France and Morocco have been found to do well in protected locations.

Pritchardia affinis/maideniana is rarely found in the wild and only occasionally in the landscape.  The most common types are the two introduced species from the south Pacific.  These are Pritchardia thurstonii and Pritchardia pacifica.  “Thurston’s Loulu” is noted for flower clusters up to six feet long.  Pritchardia pacifica has very large leaves that were used in the old days as sunshades and umbrellas. These species are adapted to dry coastal locations. The Kona Loulu prefers sunny dryer locations but has been grown at elevations as high as 3000 feet. The other rare one is named after George Schattauer, Kona kamaaina.  A few trees are found above Kaohe, Honomalino and Hookena. This specie and Pritchardia beccariana from Kulani Prison Road near Volcano are being distributed on the Big Island. The latter is a spectacular rainforest palm with leaves almost six feet across. It prefers moist locations with wind protection. Many species have been tested at Kona Cloud Forest Sanctuary in Kaloko Mauka, North Kona and at Amy Greenwell Ethnobotanical Garden in South Kona. 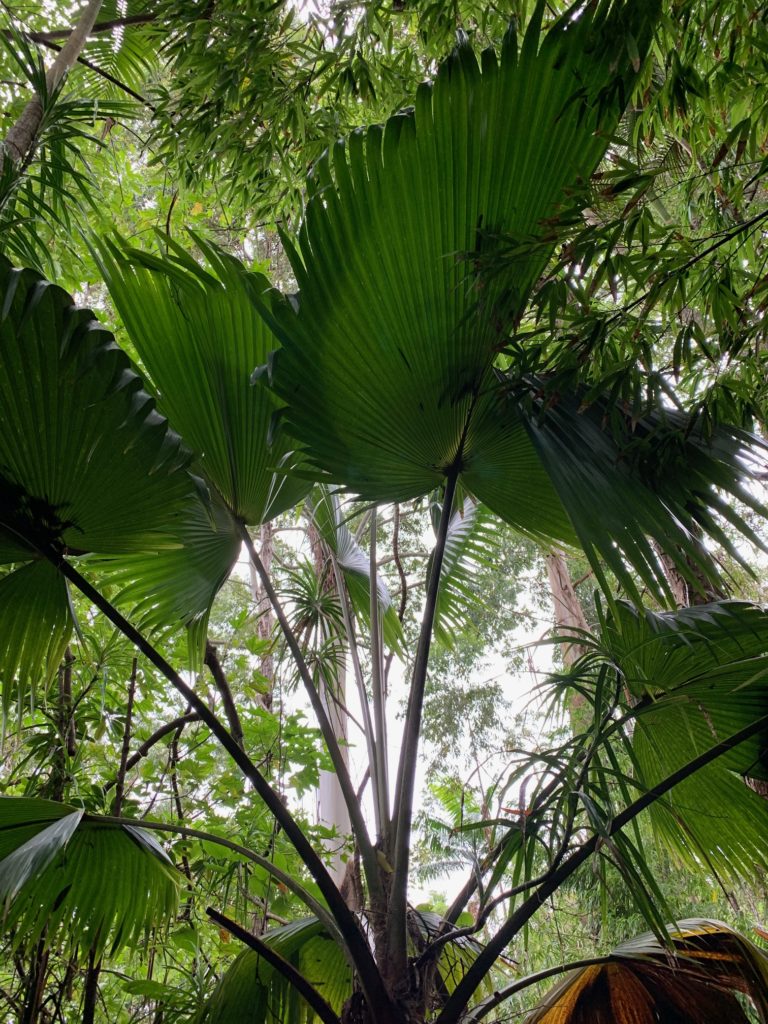 It’s important to the survival of many of these beautiful species to use them in our gardens. Unfortunately, most nurseries do not carry the native Loulus, and seed of some species are difficult to obtain.

Remember, if folks begin to show more interest in native trees such as the Loulu, our nurseries can then afford to carry them as part of their regular stock. County and State buildings and roadways are ideal for Loulus since they do not have aggressive root systems. With the Queen Kaahumanu Highway widening project from Keahole Airport to Kailua, wouldn’t it be great to see the median strip landscaped with native Loulu palms, Kamani, Naupaka and other natives. These palms and many other native plants should be used instead of grass that requires much more maintenance and water.