One of the cruel ironies of the Tropics is that the soils that support magnificent rainforests are notoriously infertile. If tropical soils are so nutrient-poor, how can they support such diverse, towering forests? The paradox of rich and complex forests growing on infertile land was not resolved until the mid-twentieth century, when ecologists shed light on nutrient cycles in tropical forests. 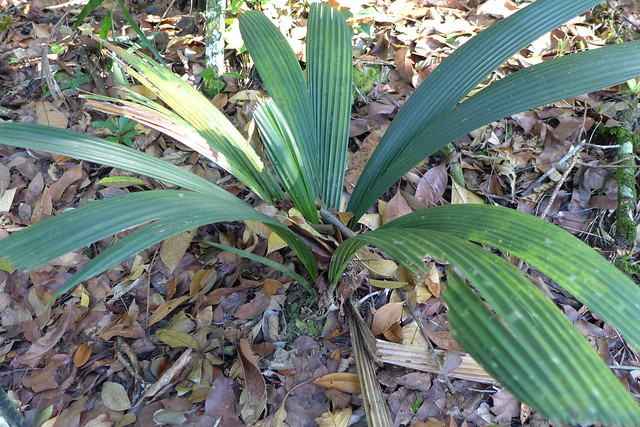 Nutrient cycles are the pathways by which nutrients flow in an ecosystem. Any given plant nutrient, say, phosphorus, will remain in the system as long as it is taken up by a living creature. Nutrients taken up by plants are passed to plant-eating animals, which in turn pass them (unwillingly) to their predators, who ultimately redeposit the nutrients in the forest through defecation, death, and decay. The system is closed and cyclical. Nutrients rarely exit the forest except through soil erosion, fire, or on the backs of timber trucks; they simple move from one organism to another.

Given that nutrients are tied up in plants and animals, one of the richest resources in the forest is the leaf litter that falls from the canopy and carpets the forest floor. Leaves and other debris – twigs, flowers, fruits, seeds, fallen epiphytes, bird and insect droppings, and dead insects – rain down on the forest floor in a constant, gentle shower. That leafy detritus is manna from heaven, and not surprisingly, many plants have evolved the ability to capture the litter fall and to take advantage of it. These are the litter-trappers, plants that catch nutrients that fall from the canopy, intercepting them before they end up on the forest floor and are sopped up by the big trees whose roots are everywhere. In a recent survey of litter-trapping plants, Zona & Christenhusz (2015) identified 575 species of litter-trappers (not counting bromeliads), of which 166 are species of palms. 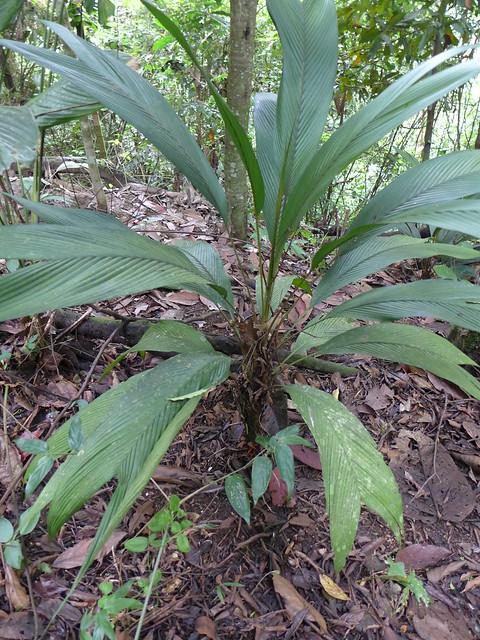 There are two ways which palm leaves can catch and exploit falling litter.

The short-petiole palms have a crown of leaves in a funnel-like position, thus catching the debris rain and channeling it to the center of the plant. Some nutrients may be absorbed directly through the plant’s leaf surface, and some nutrients are washed into the root zone beneath the plants, where they are absorbed in the conventional way. Among short-petiole palms have that have taken up the litter-collecting lifestyle, one finds Asterogyne martianaand many species of Astrocaryum trapping litter in Central and South America and Sclerosperma mannii doing the same in west Africa. Rhopalostylis sapida is a litter trapper from New Zealand, and countless understory palms in the Malesian region collect compost in their crowns. Also, the presence of broad, overlapping, sheathing petiole bases aids trapping of debris. In Marojejya darianii of Madagascar (and to a lesser extent, M. insignis, species of Masoala and Ravenea dransfieldii), the petiole bases impound water along with rotting debris into which the palms may send adventitious roots.The crowns of these palms form more of a septic tank than compost heap. Furthermore, there are many understory Calamus and Daemonorops species in Asia whose petioles are studded with long spines. Spines from adjacent petioles interlace and can trap litter just as short-petiole, litter-trapping leaves do. 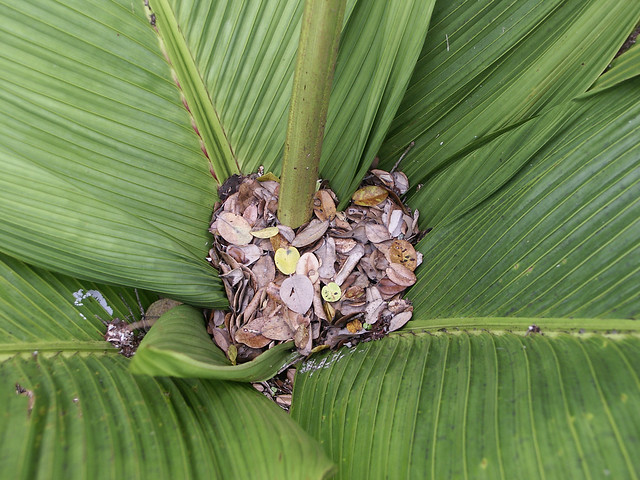 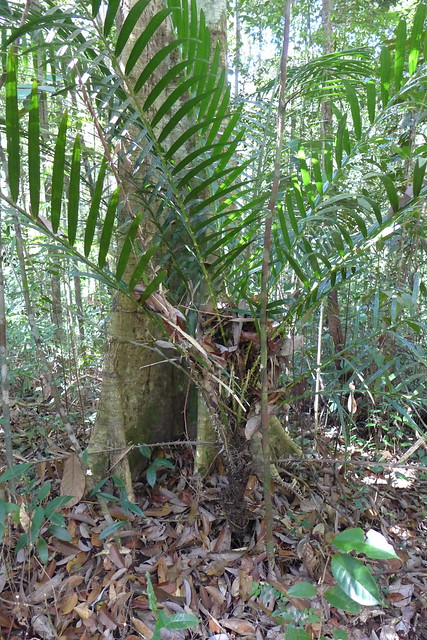 Among the long-petiole litter-trappers, none is better than Johannesteijsmannia altifrons, which grows in the spectacular forests of Peninsular Malaysia. Its enormous, stiff leaves, like corrugated aluminum, intercept the falling leaves, twigs, and bird droppings, and channel the debris to the center of the crown, where it drops through to the ground. There is forms an extra-thick layer of mulch around the palm, providing nutrients, water-holding capacity and soil temperature amelioration. Many of the Licuala species of SE Asia, such as Licuala orbicularis, do the same. 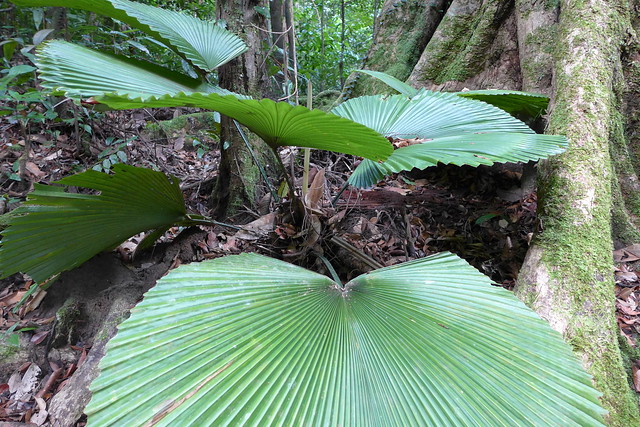 A few years ago, biologist studied the nutrient economy of Lodoicea maldivicain the granitic islands of the Seychelles. They were perplexed by the ability of this species to produce massive fruits and seeds (the largest seeds in the plant kingdom) while growing on nutrient-poor soils. The scientists concluded that the massive leaves funneled pollen and other debris to their stems and, via stem flow, to their root zone. They concluded that the palms were adept at recapturing nutrients from their own shed male flowers and pollen. They may trap litter as juvenile plants in the understory, but adult plants are canopy-emergent and thus trap mostly their own litter.

There is a third way which some plants trap litter and that is the root-basket found in one palm. Cryosophila palms are famous for their root-spines that clothe their trunks. These are roots that grow from the trunk but become hard and spine-like. In just one species, Cryosophila stauracantha, the root-spines near the base of the trunk grow upward and form a litter-trapping basket. Root-baskets are a common feature in litter-trapping aroids (e.g. the bird’s nest Anthurium species, which also trap litter in their funnel of leaves) and orchids, such as certain species of Catesetum, Grammatophyllum and Cyrtopodium. Cryosophila stauracanthais the only species of palm with a root-basket. 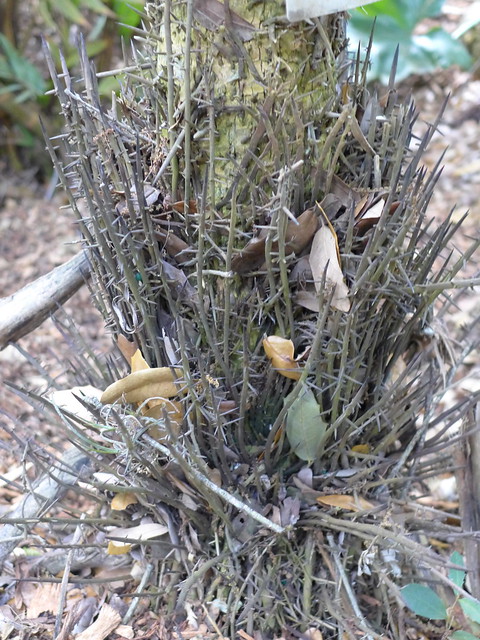 Nothing goes to waste in a tropical forest. Nutrients stay in the forest, endlessly and effortlessly cycling and recycling. A nutrient stream in perpetual motion. Long before ecologists recognized litter-trapping plants, Walt Whitman wrote of compost, “It grows such sweet things out of such corruptions….” I could not agree more.