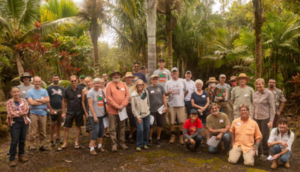 While welcoming HIPS members to his garden on May 21, 2022, Jeff Marcus described coming to Hawaii knowing little about palms and starting up Floribunda Palms and Exotics over 30 years ago. Jeff acknowledged mentors and growers in both the international and local palm societies for sharing their knowledge of palms and horticulture when he was starting out. He credits the existence of his incredible garden to Australian nursery friends who advised him early on to plant a garden around his nursery as a future source of seeds. After one of Jeff’s lectures a while back, IPS and HIPS veteran, Jules Gervais, commented, “yeah, the kid really has learned a lot.”

And so the tradition of passing down hands-on knowledge continued as two groups of about 30 HIPS members learned about palm morphology and horticulture by seeing and touching living examples. 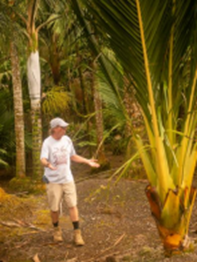 But before the technical details, Jeff preached some love. He talked about how traveling to collect seeds connected him with people from different parts of the world and changed his life – he met his wife in Thailand. Now when they travel together, Suchin and Jeff make friends all over the world, and the palms in the garden all have stories behind them.

It is often pointed out that in cultivation you can see growth and flowering behavior easily missed when only glimpsing snapshots taken on sporadic scientific field trips to wild populations. The tour through Floribunda showed us several examples of new species that were overlooked in the wild but brought to the attention of botanists because of observations of cultivated specimens at Floribunda. 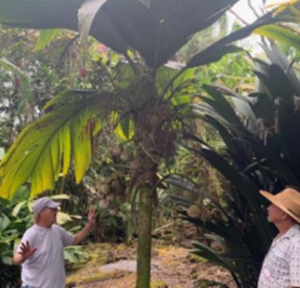 Jeff demonstrating the distinctive large fruit of P. henryana with an inflorescence branching twice as opposed to P. mesocarpa with smaller fruits and an inflorescence that branches three times.

Pelagadoxa is only known in the South Pacific associated with human habitation and is believed extinct in the wild. It had been considered a single species with variable-sized fruit, however, Jeff and others have traded two varieties for years. It wasn’t until 2019 that Don Hodel, Jeff, and several collaborators published a reassessment of the genus in Palms using morphology and genetics to describe and confirm the existence of two distinct species, the large-fruited P. henryana and the small-fruited P. mesocarpa.

Dypsis leucomalla is another species of palm first described in cultivation in the IPS journal, PALMS, in 2013 by John Dransfield and Jeff from a specimen at Floribunda. Jeff obtained seeds that were collected in the eastern escarpment forests of Madagascar in 1994 and sold the resulting seedlings as Dypsis sp. “white petiole”.

As the article in PALMS explains, “Independently Gunter Gottlieb, a commercial seed exporter in Toamasina, Madagascar, sent photographs of a mystery palm to Toby Spanner, and once circulated, JM was able to match these with his Dypsis.” It was later determined that the species was not yet described to science and so the species Dypsis leucomalla was largely described by the specimen shown here in Jeff’s garden.

Floribunda holds some of the rarest palms in cultivation, sometimes not because they are rare in the wild, but because they grow in places that few are brave enough to travel. 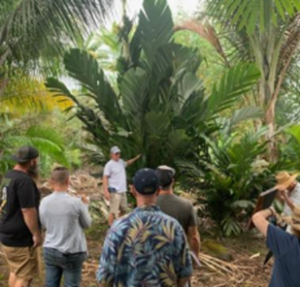 Sclerosperma mannii, from Gabon on the west coast of Africa, is a clumping palm with beautiful leaves and no trunk. Despite its beauty, it is a garden rarity because collecting and exporting seeds in Gabon is not easy.

Along with helpful tips like not to remove your shoe and throw it into a palm to knock down seeds, we learned a little about hand pollination with a demonstration on Borrassodendron machadonis. The smell of the male and female flowers is strong and musky bordering on nasty. There was some talk about the presumption that it was only the male flowers that stunk.

Jeff passed out a list of 40 holy grail palms, but we only scratched the surface and so many more not on the list distracted us. There is just no way to see it all! 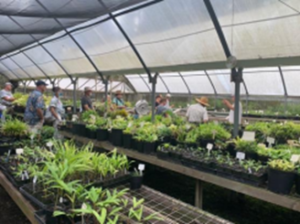 We even got to go behind the greenhouse curtain and glimpse the beating heart of Floribunda nursery.There was so much aloha from Jeff and Su. On each tour, Su trailed us in the Polaris with coolers of waters, sodas, and beer. And bento boxed pupu waited for us after the tour. Thanks to Jeff and Su for being such gracious hosts and thanks to the HIPS volunteers welcoming people at the Hawaiian Acres Association and running the shuttle bus and van. 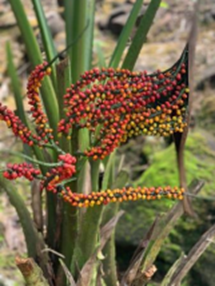 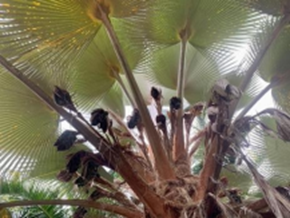 Pritchardia viscosa from Kauai. There are only a handful of these palms – 4 known individuals maybe? in the wild.15 at NTBG where they are growing them to be out planted.