A Visit to the Kampong 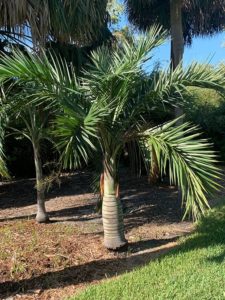 The Kampong (Malay for village) is a marvelous treat to visit for any devotee of tropical horticulture. Sited perfectly on Biscayne Bay in Coconut Grove, Florida, this was the home and garden of legendary plant explorer David Fairchild and his wife, Marian (the youngest daughter of Alexander Graham Bell).

The original Fairchild home was completed in 1928 and was influenced by the Javanese compounds that Dr. Fairchild admired while doing botanical research in Indonesia. There is certainly a tropical feel to the estate, with oolitic limestone riddled with fossils, rosewood stairs and paneling, and the liberal use of a perfect shade of southeast Asian-inspired red paint.

The Fairchilds lived at The Kampong from 1928 until Marian’s death in 1962 (David died in 1954). Fortunately, the land was purchased next by Catherine Sweeney, herself a botanist and ardent preservationist. As a result, the garden was bequeathed to the Pacific Tropical Botanical Garden which is now the National Tropical Botanical Garden (NTBG). The Kampong is the mainland garden of the NTBG which administers four other botanical preserves in Hawaii.

Save the Date! IPS 2022 Biennial in Hawaii 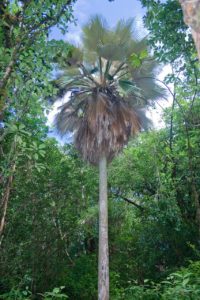 I am thrilled to re-introduce Don Hodel to our newsletter pages. Don is the world’s acknowledged expert on the genus Pritchardia. This is the first of several species that he will describe in upcoming issues (a field guide of sorts) for the identification and differentiation of the species that we might encounter during the Hawaii biennial.

Pritchardia arecina, endemic to East Maui in the incredibly wet forests on the windward slopes of Hale-akalā, is a tall, imposing, and handsome palm with a splendid canopy of large leaves distinctly silvery gray on the underside, as here near Nāhiku, on the famous “Road to Hana.” Inflorescences, composed mostly of one panicle holding the flowers and large fruits, are longer than the petioles, which have abundant fibers clothing their base. Photos by D R Hodel.