The Andersen Garden – Over Two Decades in Leilani Estates 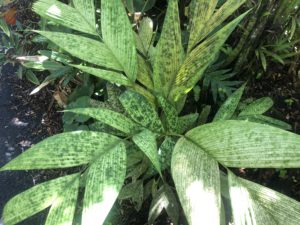 Buying a garden from a well-known global plant hunter is sure to lead to surprising discoveries, and that was definitely the case when Jerry and Cindy Andersen came to own the last garden of Ken Foster. Ken Foster was one of the earliest IPS members, having joined back in late 1950. Foster explored the globe for decades collecting seeds, trading them with other enthusiasts, and putting many of his findings into cultivation. Don Hodel wrote in a remembrance article in Palms 2003 that “several of his New Guinea, New Caledonia, and other South Pacific collections are thriving at Ho’omaluhia of the Honolulu Botanic Gardens system.” Those lucky enough to join the IPS Biennial in October 2022 will see these trees and some of their offspring in the Ho’omaluhia and Foster gardens. (Ken is not related to Thomas and Mary Foster for which the garden is named.)

It was a long-standing joke that Foster actually just sold a double coconut, Lodoicea maldivica, to Jerry, and the house and garden were free. The palm nut was a gift from plantsman, De Armand Hull. At the time Jerry and Cindy bought the property, Foster’s health had been poor for years and the garden was overgrown. They all actually thought the nut was dead. Cindy described how “One day they were clearing around the cottage and uncovered the stairway to the nut. Jerry carefully put his hands into the cinder pile, and at first, he didn’t feel anything, but then he felt the taproot! So he cleared around it to let in more light, and voila! The first frond came forth a few months later!” 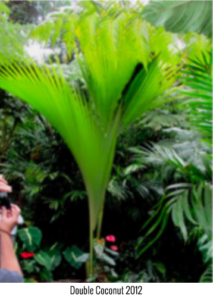 Cindy and Jerry uncovered other rare palms planted by Foster including Bactris hondurensis, Asterogyne mauritania, Hydriastele costata, Iriartea deltoidea, Nephrosperma van-houtteanum, and Areca caliso. Most of the plantings visitors to their garden will see have been planted by the Andersens, reflecting their passion for palms, cycads, and aroids. The Andersens had a successful nursery in Fallbrook between 1995 through 2015 and have been members of the Southern California Palm Society and Hawaii Island Palm Society in addition to the International Palm Society for many years. They expanded the original two-acre Foster property by purchasing neighboring lots over the years and the garden now stands at 8 acres. A few of the exceptional palms in the garden are the double coconut, (Lodoicea maldivica), the extensive Dypsis and Ravenea collections, Johannesteijmannia altifrons, and J. magnifica. Great cycads are also scattered around the garden including Encephalartos laurentianus and many Zamia species. 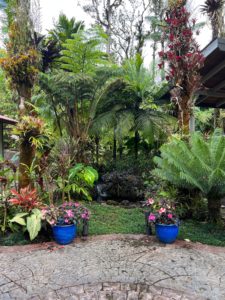 Jerry and Cindy have faced some major challenges over the years. A disease that wiped out huge swaths of native ‘Ohi’a lehua trees decimated the forest in which their garden was planted. The dying trees with naturally shallow roots fell in windstorms taking down garden structures and smashing underlying plantings. In the older parts of the garden, the mature palms shot up in the new sunlight and formed a completely different canopy. Going to the garden, you can see how Jerry created raised beds on the newest acquired property by felling the large dead trees and covering them in cinder. As the fallen trees broke down, he carved out walking trails and established new plantings. The 2018 eruption brought a river of lava and opened up several fissures throughout the community of Leilani. Those gardens not covered in lava were subjected to noxious gases, hot winds, and acid rain. Water catchment tanks were clogged with fine airborne volcanic particles called Pele’s hair and solidified lava foam called reticulite. Some species of palms did very poorly but others leafed out strong giving much-needed hope after such a traumatic time. Now four years after the eruption, the Andersen garden is a wonder to behold. The water gardens and structures nestled among glorious palms and giant anthuriums are simply incredible and a testament to the hard work and talent of two extraordinary gardeners, Jerry and Cindy Andersen.

Those who don’t live in Hawaii can visit the Andersen garden during the 2022 IPS biennial, it is definitely a garden that shouldn’t be missed!

Learn More and Register for the 2022 Biennial

Here are a few more pictures of the many wonderful palms you’ll see at Andersen! 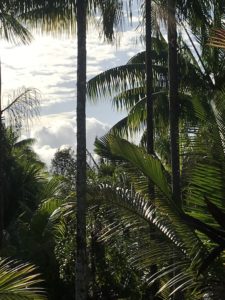 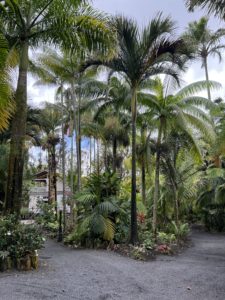