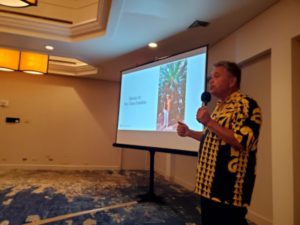 Well, another Biennial has come and gone – this one equally amazing, yet completely different from the last; while Colombia was almost entirely walking through dense habitat with a public garden sprinkled in, Hawaii’s biennial consisted entirely of public and private gardens. And despite not visiting any palms in their native habitat, we saw many native Pritchardia and had an amazing presentation by Mr. Mike DeMotta, of the NTBG, on all the Hawaiian palm species. 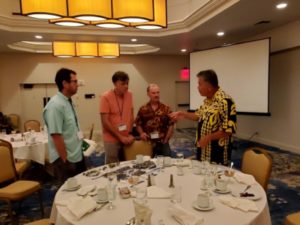 Mike charismatically went over all the individual habitats, their distribution – even accounting for the dispersal and colonization of nearly all of the Polynesian Islands! Mike also went over the many challenges these palms face and the different approaches taken with varying degrees of success. He even answered all our nerdy questions!

I came away from his talk with a deeper appreciation for Pritchardia, as well as a better understanding of their horticultural needs. Mike really knows about this special group of palms and is working wisely to conserve all of the existing 24 species. I really admire his knowledge and experience and hope to work with him on conserving these beautiful and unique palms in the near future. Ok, back to the biennial recap! 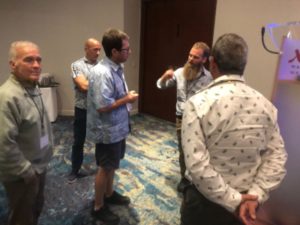 Before we were really set loose into these amazing gardens, we got a first-class explanation of the recent division of what previously consisted of the genus, Dypsis. And who else did we hear it from, but none other than THE LEAD author, Dr. Wolf Eiserhardt.  After hearing and seeing the amazing presentation, I was in 100% agreement with the findings; I don’t believe anyone had ever explained DNA sequencing as well as Dr. Wolf did for me. This may have to do with his admitted love for all things palms…

Dr. Wolf’s ability to convey his knowledge and enthusiasm was memorable. The palm work he and his colleagues at Kew are doing is profound. It is easy to look forward to what the next DNA-based phylogenic palm study uncovers, and rest easy – Dr. Baker and Dr. Wolf are sticking with palms! 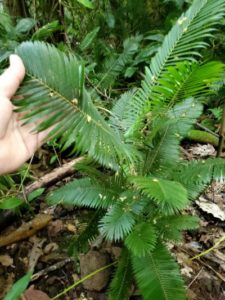 Meanwhile, in Hawaii, our next stop was Lyon Arboretum. Here, Mr. Jeff Marcus introduced us to the collections manager, Liloa Dunn, who took half of our group up into the Mountains on an exclusive tour of Lyon. Making the trip even more special was being in the same group as experts like Dr. Wolf himself and, of course, Jeff Marcus. It was really awesome to see the genuine enjoyment from both, which was naturally contagious to the group. I remember Dr. Wolf, Chip Jones, and I having a moment on the trail, with the diminutive and alluring Calamus ciliaris. What an attractive little monster! Liloa was amused by our love of even the spiny stuff and that must have convinced him we were alright and went on to be an amazing guide with first-rate knowledge of the garden and its plantings. Liloa answered all our questions with detailed answers and had a good sense of humor.

He also spoke of the late Ray Baker, as if he was still there. It’s obvious how his legacy is viewed and respected in that magical garden. As we were leaving this enchanted mountaintop, we were greeted by a pair of stunning white cockatoos. Liloa went on to explain how they got there and how Hawaii has accepted them, just like the Day geckos that are everywhere and so cool. Both groups met back up for lunch and then we got on the bus to Foster Botanical Garden. 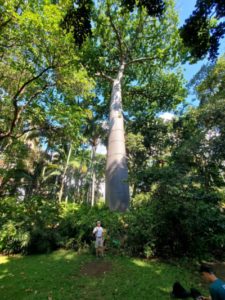 Comparing Lyon with Foster is basically like comparing opposites-both gardens are amazing, and that is the extent of the similarities. Foster is flat and relatively small. The garden is in the middle of the city and roads are the garden’s borders. Foster also seemed very old – the plants in this modest few acres were many generations old and many palm identities were obfuscated by their incredible heights!

Where Lyon’s collection worked more as a whole mountain ecosystem, Foster was a well-cared-for collection of individual plants and each could easily be separated from the garden, in your mind. As a specimen garden, Foster Botanical Garden was very impressive. 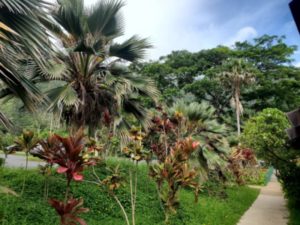 The two main ladies Talia Portner and Naomi Hoffman, who are in charge of the life of this garden were fun and knowledgeable.  Not only do they manage this garden, but we also met them the next day at Hoʻomaluhia Botanical Garden. 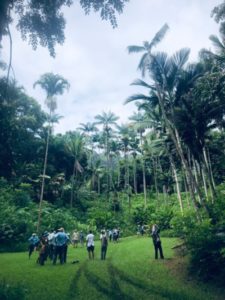 They do an amazing job, with both of these public gardens but we, unfortunately, didn’t get to see as much of Hoʻomaluhia Botanical Garden as I would have liked to. We could have spent a week here, and not seen all this place has to offer. If nothing else, the views we experienced, at this location, may have been the best…

Once we got to the big Island, we switched from public to private world-class gardens. Hilo is not as touristy and it felt more Hawaiian than the other islands, to me. Less comfort, yes, but the gardens just got better and better, and all in perfect weather! When I say world-class garden, that’s what I mean; in a group of highly intelligent, world travelers, there were differing opinions on which garden was the best garden they had ever seen in their life. I was simply flabbergasted by the sheer diversity and intensity of every place we went. Never has a Biennial come close to showcasing this many species of palms, displayed in a garden setting, with so many other eclectic companion plants! 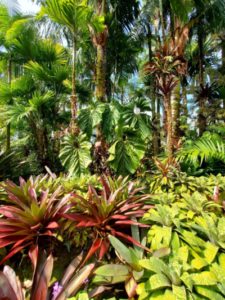 Casa de Los Palmas was the first candidate for ‘most amazing garden I have ever seen’. Equally as nice was Irene & Lars’ hospitality. 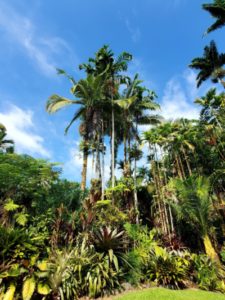 There were so many plants and garden features that were pulling all of us in differing directions, it was hard to stay with anyone for long! Jeff Brusseau showed me where the river, running through their property, had a natural pool carved into it – only in my dreams…

I didn’t actually take a poll, but Jerry & Cindy Anderson’s Garden might have won overall. I heard so many people admitting to this myself, unable to speak, but blown away by so many species never before seen, like Calamus erectus and a Lanonia species, every bit as mottled as a ‘mapu’! It was also my first time seeing a purple ti plant – I digress…

Both aforementioned gardens were spectacular and filled to the brim with some of the rarest stuff you have ever seen! These gardens evoked a feeling inside that was as comforting and addictive as a drug. They represented the pinnacle of what many of us would work a lifetime to create and have. And even though palms were the backbone of both these gardens, you didn’t need to know all about plants to know what you were seeing and feeling. 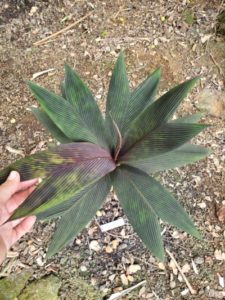 And the biggest feelings came from the Jeff and Suchin Marcus garden. As far as gravitas and the importance of what we are doing, nothing called to me like Jeff and Suchin’s manifestation of a dream. Oddly enough, Jeff doesn’t even consider his property to be a garden, and by some standards, he could be right – his place is far too focused to stand out to the uninitiated. 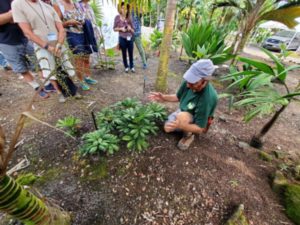 My best attempt to describe it would be a palm factory where instead of machines and workers, it is just land, Hawaiian magic, and love. Magic in the sense that tangible outcomes were visible, with the actual individual processes obscured by beautiful forms and colors.

In so many instances, a single palm represented the future of that species. It was plain as day and upon seeing and feeling it; you understand that yes, Jeff has made a living doing this, but that was just a byproduct of his passion and know-how. 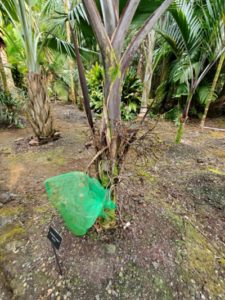 Feeling – or what you feel – in a garden, can be one of the most important details in what makes a garden so great. This feeling or feelings can be interpreted as speech – does the garden speak to you and what does it say? Thank you, Jason Dewees, for helping us to see past the plants – your eye and alliterative prowess have helped all of us to see and feel more.

I definitely feel like I saw and experienced more on this biennial than the last. And that absolutely has to do with connecting one biennial to the next, to elucidate this natural world. This Hawaiian biennial was a supremely humbling experience, and I am eternally grateful to everyone who opened their gardens and expertise to the IPS. Hawaii proved to be a magical place and a palm fantasy for all of us for many years to come. 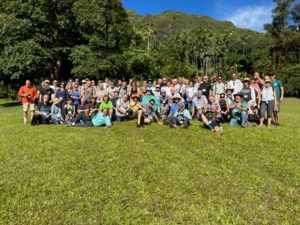