You never know what will spark the fire of inspiration. For Jerry Welch, a chance encounter with a stranger on the street of uncertain character during a random trip to Florida led him to a  lifetime passion for palms, culminating in a glorious two-acre collector’s garden on Maui. Ignoring the advice of friends, Jerry took up the offer from a stranger who promised to show him some of the best properties in Key West if Jerry would get him some breakfast. A trip to Denny’s and Jerry was down the rabbit hole. The man took Jerry into the back gates of big houses with huge palm collections. He was astounded at the palms and took lots of pictures.

“The next day when I wanted to find out what some of them were, especially the Coryphas, I took pictures to the local library and they had one book in the back, in the reference section, Palms Around The World. The librarian stood behind me while I read the book. They were afraid I would tear the pages out. They had bad luck with their palm books.” 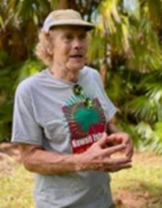 Shortly after he came back, a famous palm researcher gave a slide lecture at a Maui public library. He met a number of people interested in palms there, and some Big Island palm people even flew over. For a short time, Sunya Erlichman organized a small Maui palm society in the early 90s, with a few members including – Jim Dobson, Bill Bleitz, John Stone from the Maui  Tropical Botanic Garden in Iao Valley, and the poet William Merwin. There weren’t a lot of palm gardens to see on Maui, and they all would fly over to the Big Island for HIPS tours and to shop for palms. 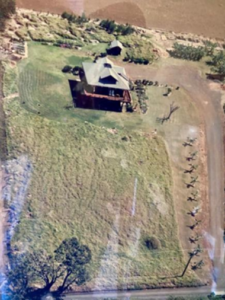 An early aerial photo shows the driveway lined with Roystonea oleracea with its straight trunk, already setting himself off from the typical planting of the swollen trunked R. regia. You can see the hat-racked Earpod tree, Enterolobium cyclocarpum, to the right of the house. Now it nearly spans the entire area between the house and driveway.

“The guy that had Kaphoho Palms came to pick us up in a convertible. We came back with all kinds of palms; we came on the plane with some big palms that they let us just stick in the seats because the plane wasn’t full. It was a different time.”

After selling his dental practice on the mainland, Jerry moved to Maui permanently. He created a conceptual sketch of shapes, sizes, and types of plants but not a formal plan. Jerry knew he wanted to line his driveway with royal palms and was set on finding a specimen Earpod tree to anchor the landscape.

Most of the 2-acre property was still field grass when his wife Robin moved in with him 24 years ago. It was Robin who pushed the garden out by hiring a guy to mow paths through the field grass. They took a shopping trip to Peter Palm on the Big Island (no longer in business), and  Robin bought Jerry a container of mostly 5-7 gallon palms and a few 10-15 gallon palms, thinking they wanted to see them grow tall in their lifetime. They planted around the house and in the upper part of the property, but it wasn’t long before Robin stopped a guy driving up the road with a machine and hired him on the spot to knock down the rest of the grass on the lower half of the property.

Under the auspices of delivering the HIPS t-shirt Jerry ordered, Michael and I got to walk through the enormous palms planted three decades ago. I don’t think Jerry ever forgot his love for giants like the Coryphas he first saw in Florida; we saw some of the largest specimens of rare palms we’ve ever seen.

It’s easy to get fixated on the large palms in the garden, but wonders were to be found up close and low to the ground as well.

Thank you, Jerry and Robin, for so much aloha. 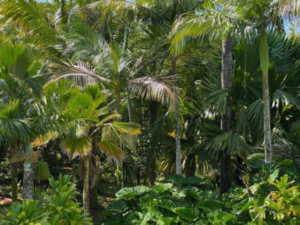 View looking toward the road from the upstairs lanai. Dense plantings give way to open green lawns to better appreciate the massive plantings. 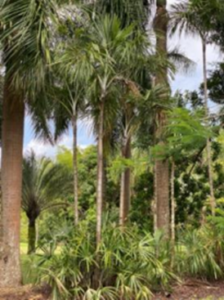 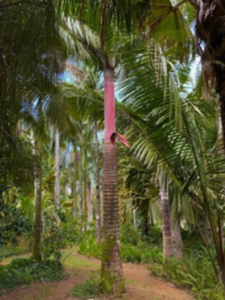 This is what a Lemurophoenix halleuxii looks like with a trunk! We were lucky to see this just after a leaf dropped and exposed the brilliant pink crownshaft.